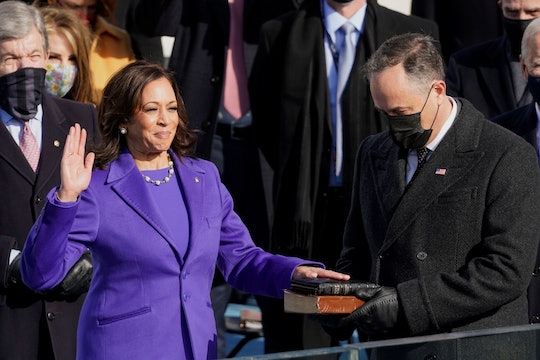 Bust out your jewelry box and a pair of Chuck Taylors, too!

To celebrate the monumental history made on Inauguration Day, women and little girls wore pearls in honor of Kamala Harris officially becoming as our nation's first woman vice president.

Women across the nation sported pearl necklaces on Jan. 20 to pay tribute to Harris with a nod to her one of favorite accessories. Harris is not only the first woman to be sworn in as the Vice President of the United States, but she is also the first Black woman and first woman of South Asian descent to hold the office. It's a hugely important and incredible moment in American history that countless families are celebrating, many with a string of pearls.

One Facebook group, Wear Pearls on Jan. 20, 2021, which has more than 400,000 members, helped kick off the trend. "We want as many women and young ladies to wear their pearls on Inauguration Day of the first WOMAN VICE PRESIDENT in the history of the United States," the group's description reads. On Jan. 20, women shared photos of their outfits accessorized with pearl necklaces and Harris' sneaker of choice, Converse Chuck Taylors. Many also took to Twitter to share their outfits in honor of our new vice president.

Harris did, in fact, wear pearls on Wednesday. The vice president wore a matching purple coat and dress as well as a pearl necklace and matching earrings to take the oath of office.

Not only do pearls symbolize longevity and hidden knowledge, according to the University of Michigan, but they are also a symbol of Harris' college sorority, Alpha Kappa Alpha. Harris pledged Alpha Kappa Alpha while attending Howard University in Washington, D.C. in the late 1980s, according to NBC Washington. Pearls are often meant to represent the sorority's founders, as Town & Country explains, who are referred to as the "Twenty Pearls."

Indeed, Vice President Harris often accessorizes her outfits with pearls, so it makes sense that she would wear them on one of the biggest days of her life. Pearls were everywhere. Women, mothers, and little girls were all proud to sport them in photos that were shared on Twitter.

Over the next four years, Harris will have many opportunities to show off her signature sense of style. Beyond her pearls, you can probably expect her to rock a formal pantsuit with a pair of Chuck Taylor sneakers. After all, she loves them. "I've always worn Chucks!," Harris said during an appearance on CBS Sunday Morning earlier this month. "It's my casual go-to. You know, I grew up with Chucks. I just love them." Pearls and Chuck Taylors, name a better combo.