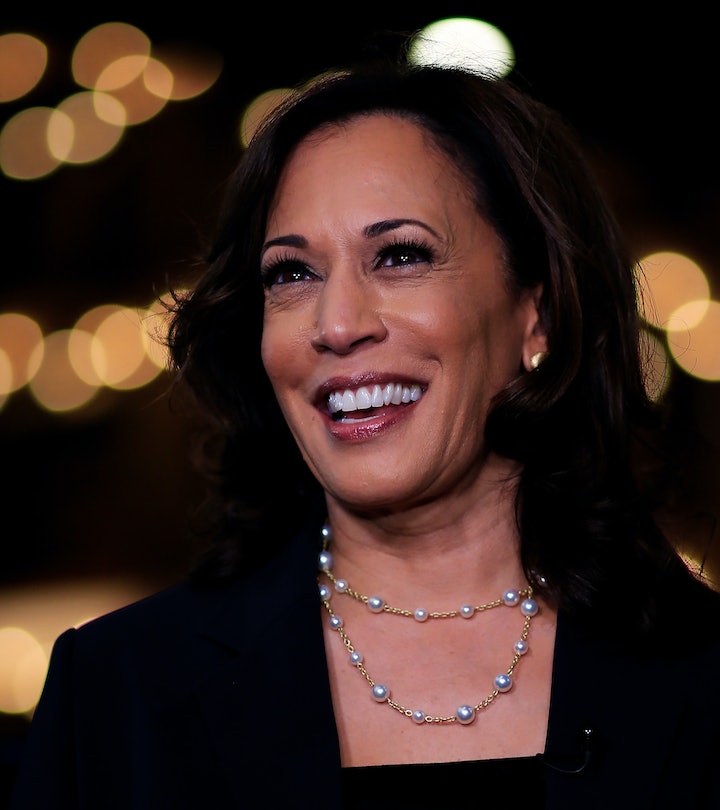 "I'll be thinking about my mother."

For millions of people across the country and, indeed, around the world, Jan. 20 is on their minds. Inauguration Day 2021 will mark a new page in the history books where, for the first time ever, not only a woman but a woman of color will become the Vice President of the United States. It's a massive moment, weighted with the many women who have paved the way. Indeed, Kamala Harris has shared that her mom will be on her mind when she takes the vice presidential oath of office.

During an interview with Robin Roberts on Good Morning America, Vice President-elect Harris discussed the upcoming presidential inauguration and shared what will be on her mind when she is sworn in as America's first female vice president. "I'll be thinking about my mother," Harris said during the December interview. "I'll be thinking about all those girls and boys. You know, before the pandemic struck, fathers and the mothers that would bring them around and say, 'You know, you can do anything.'"

Harris' mother, breast cancer researcher Shyamala Gopalan Harris, raised her two daughters largely on her own. She died of colon cancer in 2009, according to CNBC. Over the years, Harris has often spoken of her mom's impact on her life, especially during big moments in her career. In fact, Harris' mother stood by her side as she was sworn in as San Francisco's new district attorney in 2004.

When President-elect Joe Biden chose her as his running mate back in August, Harris tweeted, "My mother always use to say, 'Don’t just sit around and complain about things. Do something.' I dearly wish she were here with us this week." And during her victory speech in November after a long, drawn-out election process finally came to a close, Harris again spoke of her mother, "When she came here from India at the age of 19, she may not have quite imagined this moment. But she believed so deeply in America, where a moment like this is possible. And so I'm thinking about her."

Kamala Harris' mom will be on her mind on Jan. 20.

When Harris officially becomes the first Black woman and the first woman of South Asian descent to be sworn in as Vice President of the United States this week, the world will be watching. Little children, girls especially, will see her and dream of what they might someday become. Heads of state across the world — Republicans, Democrats, celebrities — everyone will be watching. And there she will stand, inside that moment, thinking of her mom.