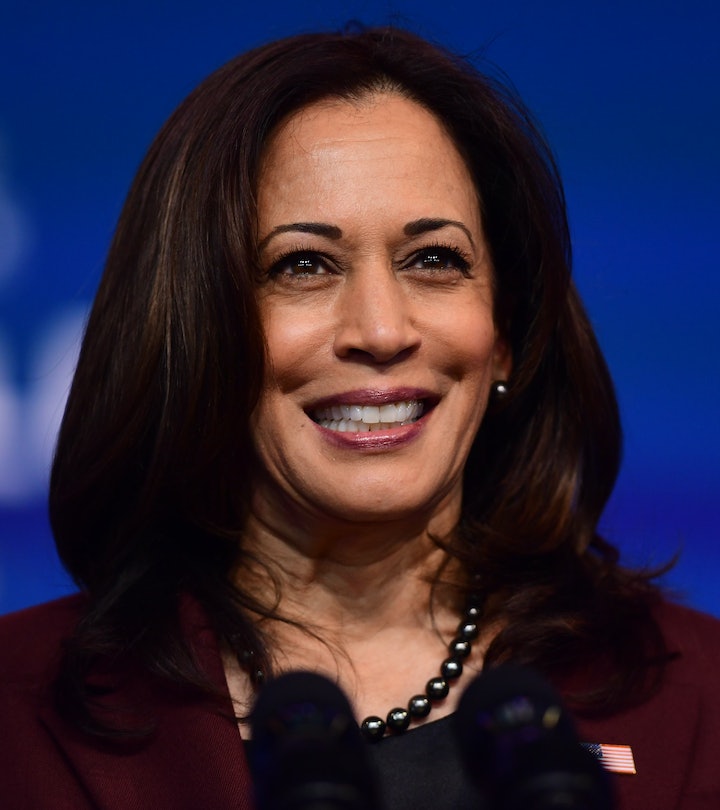 She did wear her trusty Converse sneakers in the photo, though.

With the inauguration just days away, Vice President-elect Kamala Harris' fist appearance on the cover of Vogue is big news. But while Harris looks fabulous as always, not everyone was pleased with the main photo that was chosen.

Harris wore her signature pair of black Converse sneakers and a casual black suit against a pink and green backdrop, which are colors inspired by her time as a member of the sorority Alpha Kappa Alpha at Howard University. This big cover debut was shot by photographer Tyler Mitchell, who has photographed Beyoncé for the magazine.

The senator from California has been a longtime fan of Converse sneakers, according to The Oprah Magazine, and told The Cut in 2018 that she has a "whole collection" of them — including pairs that she can wear in cold weather, to pairs that she can wear in a pantsuit on the cover of Vogue. It wasn't just Harris' fun sense of style that has captured Vogue readers and voters across the United States.

But not everyone liked the cover. A source familiar with the photo shoot told CBS News that the photo chosen for the cover was reportedly not the image that Harris' team agreed upon. Some users on Twitter pointed out that Harris looks "washed out" in the photo, which appears to dull her appearance. "How could you do such a disservice to such a vibrant, beautiful woman?," one Twitter user asked. "Shameful." A spokesperson for Vogue told CBS News that they chose the "informal image" which captured "Harris' authentic, approachable nature — which we feel is one of the hallmarks of the Biden/Harris administration."

In addition to the cover, people should also be paying attention to her words inside of the story. Harris told Vogue that she plans on tackling the coronavirus pandemic during her first 100 days in office, placing an emphasis on distributing the vaccine, helping small businesses adapt to life under the coronavirus, and protecting homeowners against evictions. She also hopes that people will unite together to help one another now that there is a change in the oval office. "We can agree that we have more in common than what separates us," Harris told Vogue. "And agree that that it's not in the best interest of who we are as a nation to have any one group suffer for who they are."