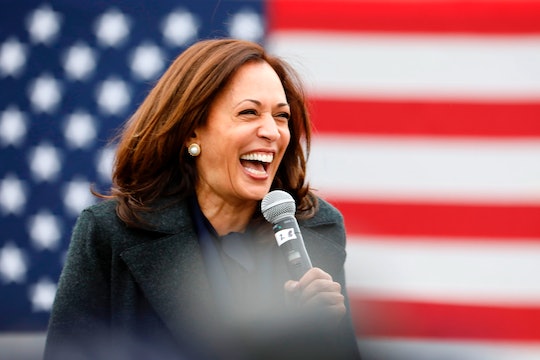 Saturday, Nov. 7 marked a monumental moment in history. After days of ballot counting and a tight race between President Donald Trump and former Vice President Joe Biden, Kamala Harris has officially made history as the Democratic candidate's running mate. Not only as the first woman to serve as Vice President of the United States, but Harris is also the first Black, South Asian-American woman to be elected to the role.

After the battleground state of Pennsylvania called its election results in favor of Biden, bringing his electoral college vote count over the necessary 270, various news outlet reported that Biden has been elected the 46th President of the United States against Trump. It was a nail-biting race with results that heavily relied on votes in Nevada, Arizona, Pennsylvania, and Georgia, and one with a victorious end for Biden and Harris.

Once the historic call had been made, Harris shared a brief statement on Twitter, saying that the 2020 election was "about the soul of America" and she and Biden are eager to get to work.

"This election is about so much more than @JoeBiden or me. It’s about the soul of America and our willingness to fight for it," Harris tweeted on Saturday. "We have a lot of work ahead of us. Let’s get started."

Harris had already solidified her place in history when Biden announced the 56-year-old California senator, who also ran for the Democratic presidential ticket, would be his running mate, making her the first Black woman to be nominated for vice president by a major party.

Since then, the Biden-Harris ticket has been celebrated by voters across the country. And on Saturday, the excitement and sense of relief was palpable. Harris' niece, Meena Harris, shared on Twitter that her 4-year-old daughter "just yelled 'BLACK GIRLS ARE WELCOME TO BE PRESIDENT!'"

Chrissy Teigen, who attended a Biden-Harris rally with her husband John Legend and their kids Luna and Miles earlier in the week, tweeted after the call was made, "My god it feels like I just took off a weighted blanket, unhooked my bra and taken out my extensions all at once."

Former Secretary of State Hillary Clinton, who ran against Trump in 2016, thanked voters for making this "history-making ticket" a reality. "The voters have spoken, and they have chosen @JoeBiden and @KamalaHarris to be our next president and vice president. It's a history-making ticket, a repudiation of Trump, and a new page for America," she tweeted. "Thank you to everyone who helped make this happen. Onward, together."

Also on Saturday, Harris' husband, Doug Emhoff, shared a photo of him hugging the VP-elect after they learned the news and wrote, "So proud of you."

As the nation reflected on the results of this historic election, Harris, who is also a proud "momala" to her stepkids, shared a short and emotional video of her call to Biden. "We did it. We did it, Joe," she said with a big smile on her face. "You're going to be the next President of the United States." And with that, she made incredible history.