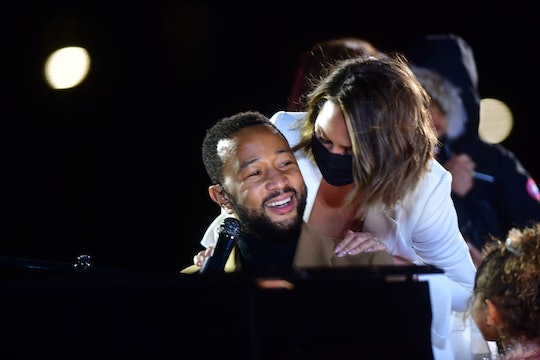 On Monday evening, just ahead of Election Day, John Legend and Chrissy Teigen attended a rally in support of former Vice President Joe Biden in Philadelphia. The couple also brought their children, Luna and Miles, to send a message about the importance of engaging young people in democracy.

Legend was slated to speak and perform at the drive-in rally, but after performing "Wake Up Everybody," the singer-songwriter surprised the audience by asking his family to join him on stage. Teigen's appearance marks her first public engagement since the couple suffered the loss of their third child, whom they named Jack, at 20 weeks gestation.

"We're teaching our young people early that they've got to participate in their democracy," Legend said at the rally.

Though Teigen and their children did not remain on stage for long (having kids with a limited ability to hold it together in public makes stars just like us!), she blew a kiss to Legend as he went on to perform "Never Break," a song he recently dedicated to Teigen at the Billboard Music Awards.

The rally is far from the pair's first foray into politics. Indeed, the subject is one they not only don't shy from but openly embrace. They have contributed to progressive causes from criminal justice reform initiatives and bail funds to Planned Parenthood and have been open about the candidates who've won their support. While vocal supporters of Elizabeth Warren in the primaries, they have been enthusiastically promoting Biden since his nomination. In the September issue of Marie Claire, Teigen said that Biden was a candidate she felt her children could look up to. "We’re voting for him because we think he’s going to do an incredible job of bringing a bit of healing to the country," she said.

In the same interview, she also expressed that it is important to her and Legend that their children be aware of the social injustice around them as well as their own privilege. "We just try to talk to them like little adults, saying it in words they'll understand, making it known that it's very serious, and letting them ask as many questions as they need," she told the magazine, adding that she leans on her husband to lead discussions on race, because while her children "are Asian and white too, their skin color is Black."

Later in the evening, Legend returned to the stage to deliver a brief speech. While he and Teigen are openly critical of President Donald Trump and his administration online and in the press, Legend remarked on one thing he and the president have in common — they're both University of Pennsylvania alumni. "I'm a proud Penn alum but don't hold me responsible for the behavior of all of our alumni," he joked. "Some of them, you know, they slip through the cracks."

Legend went on to highlight voters' ability to effect political change in what has been a year full of so much loss. "We've lost a lot," he said. "But Philadelphia, what we haven't lost is out ability to decide what happens next."