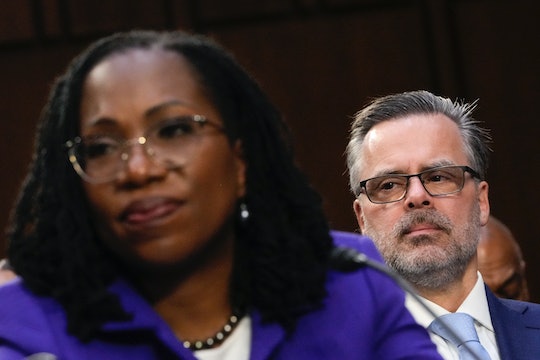 Ketanji Brown Jackson’s Husband Got Emotional During Her Confirmation Hearings

Confirmation hearings have begun for Ketanji Brown Jackson, President Biden’s nominee to the Supreme Court to replace Justice Stephen Breyer, who is retiring. As is customary, Brown Jackson, a federal judge since 2013, took time during her opening remarks on the first day of her four day hearing to introduce herself to the Senate Judiciary Committee as well as the nation. She talked about her upbringing, parents, brother, professional mentors, and others. After her sweet comments to Dr. Patrick Jackson, Ketanji Brown Jackson’s husband cried, or at least visibly teared up. (There was no blubbering: this is a Senate confirmation hearing, after all, so things are generally fairly stately.)

“And speaking of unconditional love, I would like to introduce you to my husband of 25 years, Dr. Patrick Jackson. I have no doubt that without him by my side from the very beginning of this incredible professional journey, none of this would have been possible. We met in college more than three decades ago and since then he’s been the best husband, father, and friend I could ever imagine. Patrick, I love you.”

Jackson could be seen dabbing his eyes in response.

The college where the pair met as undergrads was none other than Harvard. After graduation Jackson Brown, like 21 other Justices before her, attended Harvard Law School, where she was editor of the Harvard Law Review. Jackson earned a medical degree from Columbia School of Medicine. According to reporting from NPR, Federal Judge Patti Saris hired Brown Jackson as a clerk right out of Harvard law, and recalls him being “so fascinated” by his wife’s work that he would go to the courtroom straight from a shift at Massachusetts General Hospital, where he was a surgical resident, just to watch her. Sitting in the back row of the courtroom, Saris recalls, he looked so scruffy and tired at the end of his long hours that at one point the courtroom marshal approached the bench and whispered discreetly, “Judge, would you like me to remove the homeless man in the back row?”

During a 2017 speech at the University of Georgia’s School of Law – Reflections on My Journey as a Mother and a Judge – Brown Jackson acknowledged that she and Jackson were an “unlikely pair.” “Patrick is a quintessential 'Boston Brahmin',” she said, “his family can be traced back to England before the Mayflower and his family’s been in Massachusetts for centuries. He and his twin brother are, in fact, the sixth generation in their family to graduate from Harvard College. By contrast, I am only the second generation in my family to go to any college, and I am fairly certain that if you traced my family lineage back past my grandparents — who were raised in Georgia, by the way — you would find that my ancestors were slaves on both sides.”

In that same speech, she also acknowledged the “professional give and take” and “delicate balancing” required of being professionally ambitious while married to an ambitious partner and also being a parent. “I would have loved to have stayed in DC to launch my career [after my clerkship with Justice Breyer] but... I thought it best to accompany my husband back up to Boston for the completion of his surgical residency, primarily because at that point I was three months pregnant.” It began, she said, an ongoing struggle to balance all aspects of her life. “How does one manage the demands of your career and also the needs of your family?”

Brown Jackson and Jackson have two children, Leila and Talia, who are 17 and 21. Brown Jackson also acknowledged them in what she described as a “special moment” during her introduction. “Girls, I know it has not been easy as I've tried to navigate the challenges of juggling my career and motherhood. And I fully admit that I did not always get the balance right,” she said, “but I hope that you've seen that with hard work, determination, and love, it can be done. I am so looking forward to seeing what each of you chooses to do with your amazing lives in this incredible country. I love you so much.”