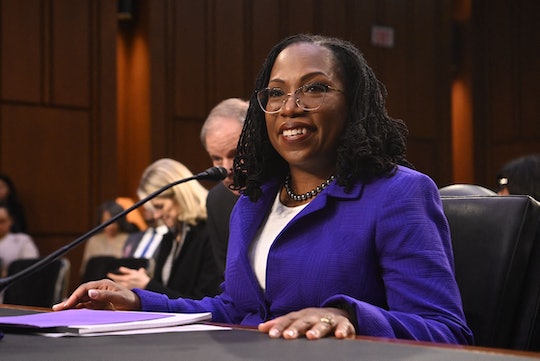 The SCOTUS has officially gained another working mom.

Justice Stephen Breyer announced his plans to retire in late January, leaving an all-important seat on the Supreme Court empty in his absence. After several weeks of deliberation, President Joe Biden announced his nomination and it’s one for the history books. On Feb. 25, Judge Ketanji Brown Jackson became the first Black woman to be nominated for a seat on the United States Supreme Court. Mere months later on April 7, she was officially confirmed by the Senate as the SCOTUS’ newest justice. This was the day that Brown Jackson made history as the first Black mom to sit on the bench as a Supreme Court Justice.

On April 7, after several weeks of confirmation hearings that were emotional for her entire family, particularly when she was asked questions that could be considered racist and sexist, Justice Jackson was confirmed to sit on the Supreme Court by the U.S. Senate. Jackson was confirmed with a majority vote of 53-47, with three Republicans supporting her alongside all Democrat senators. She will replace Justice Stephen Breyer when he leaves the bench at the end of this session in June. News of her official confirmation was delivered by Vice President Kamala Harris, who smiled as the Senate broke out in applause.

It was a big moment for Democrats, and of course an even more historic moment for Justice Jackson and her family.

Justice Jackson spoke about her family in her opening statement.

When Jackson sat down for her all-important confirmation hearings in March, she opened her remarks by talking about her family. She thanked her husband Dr. Patrick Jackson, who wiped tears from his eyes as she acknowledged, “I have no doubt that, without him by my side from the very beginning of this incredible professional journey, none of this would have been possible.” She went on to note he was “the best husband, father, and friend I could ever imagine.

After thanking her husband and her extended family, Dr. Jackson shared a special message with her two daughters, Talia and Laila. “Girls, I know it has not been easy as I’ve tried to navigate the challenges of juggling my career and motherhood. And I fully admit that I did not get the balance right. But I hope that you’ve seen that with hard work, determination, and love, it can be done.”

Jackson, 51, was raised in Miami, Florida by parents who had both attended segregated schools as children. They eventually became teachers and leaders in the Miami-Dade Public School system themselves, and clearly seemed to instill in their daughter a sense of public service.

After graduating from Harvard Law School, Brown Jackson went on to clerk under Justice Breyer for two years. From there, she decided to switch gears and work as an assistant public defender, a decision she said at her 2021 U.S. Court of Appeals for the D.C. Circuit confirmation was based on her family background. “I come from a background of public service. My parents were in public service, my brother was a police officer and (was) in the military,” she said at the time, as reported by CNN. “And being in the public defenders' office felt very much like the opportunity to help with my skills and talents.”

As a public defender, an appellate court judge, and potentially a Supreme Court Justice, Judge Jackson has made a career of public service. And she appears to have made it a theme for her own family as well.

Jackson’s husband is a surgeon.

After meeting while they were both studying at Harvard, Ketanji Brown married Dr. Patrick Graves Jackson in 1996, according to the Miami Herald. Dr. Jackson works as a surgeon at Pasquerilla Healthcare Center in Washington; he graduated from Columbia University in 1995, just one year before they were married. He performed his residency at Massachusetts General Hospital.

Through her husband, Judge Jackson has a distant relation to former Republican Speaker of the House Paul Ryan. Dr. Jackson is the twin brother of Ryan’s brother-in-law William Jackson. When Judge Jackson was nominated to the district court in 2012, Ryan commended her publicly. “Our politics may differ, but my praise for Ketanji’s intellect, for her character, for her integrity is unequivocal,” he said, as reported by ABC News. “She’s an amazing person, and I favorably recommend her consideration. We’re family, by marriage.”

She is only the third Supreme Court Justice who is a mom.

Justice Jackson’s confirmation as a Supreme Court Justice makes her the sixth woman to sit on the bench in history, and the first Black woman ever. What’s more, she is only the third mother to be sworn in; Justice Ruth Bader Ginsburg was a mother of two, while Justice Amy Coney Barrett, who replaced Justice Ginsburg after she died in September 2020, is a mom of seven. Justice Ginsburg’s children were adults by the time she was confirmed to the Supreme Court. In Justice Jackson’s case, her daughters are in those all important in-between years.

While Jackson’s oldest daughter has stayed out of the public eye, in a 2017 speech Jackson referred to her daughters as the “sassy sisters” and admitted that they were “precocious teens.” She also said that she first went back to work when Talia was a few months old and “the firm was very supportive, but I don’t think it is possible to overstate the degree of difficulty that many young women and especially new mothers face in the law firm context.”

Her daughter Laila is 17 and once wrote to President Barack Obama.

When Laila was just 11 years old, she wanted her mother to take over the position left empty by the late Justice Antonin Scalia so badly that she personally wrote a letter to President Barack Obama recommending her. “I, her daughter Leila Jackson of 11 years old, strongly believe that she would be an excellent fit for the position. She is determined, honest and never breaks a promise to anyone, even if there are other things she’d rather do,” Jackson read from her daughter’s letter in that same 2017 speech. “She can demonstrate commitment, and is loyal and never brags. I think she would make a great Supreme Court justice, even if the workload will be larger on the court or if you have other nominees. Please consider her aspects for the job. Thank you for listening.”

This article was originally published on Feb. 28, 2022