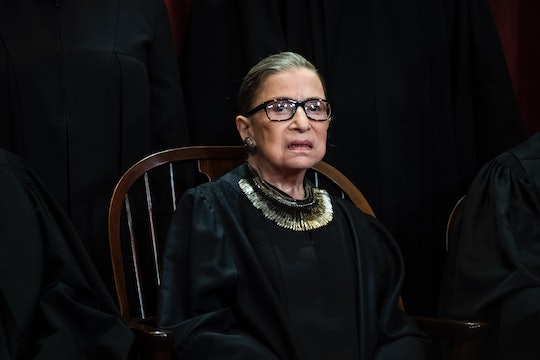 In the days following her death, Ruth Bader Ginsburg's granddaughter remembered their loving relationship in an interview with the BBC's Newshour. It was a poignant reminder that the U.S. Supreme Court justice was more than a cultural icon, a women's rights champion, and a brilliant legal mind — she was a mom, a grandma, and a woman who will be greatly missed by the people who loved her most.

Ginsburg death at the age of 87 has left the world in mourning. Professionally, she is being remembered by politicians, celebrities, and world leaders as a force for good. A woman who changed the legal landscape for women's rights in the United States as the co-founder of the Women's Rights Project at the American Civil Liberties Union and the second woman in history to sit as a Supreme Court justice.

Ginsburg was also a mother to daughter Jane and son James, as well as a grandmother to four. One of her grandchildren, Jane Ginsburg's daughter Clara Spera, spoke to the BBC after her grandmother's death and shed light on their close relationship. For instance, when Spera was asked whether or not she went to her grandmother for advice while she was studying to become a lawyer, she responded that Ginsburg was "the person I turned to again and again long before I ever went to law school."

"Because before being a role model or a legal star she was my grandmother," she went on to explain in the same interview. "And in the same way I may have turned to her in law school with questions or asking for advice, I had always done that because of who she was to me."

Spera went on to say that going to law school helped her recognize "the real impact of the work that [Ginsburg] had done.... because no matter what law school one attends in the United States you will read her opinions." Because of her schooling, Spera told the BBC she gained "a new appreciation of her as a lawyer."

In a 2018 essay for Glamour, Spera wrote about her "Bubbie," as she affectionally called Ginsburg, explaining at the time that their relationship was very much a regular granddaughter/grandmother bond: "Bubbie with whom I spend most High Holy Days. Bubbie who took me to see The Book of Mormon, where we both laughed until we cried. Bubbie who loves going to the movies. Bubbie at whom I get a kick out of poking fun. Just a Bubbie like any other."

Spera was with her Bubbie in the days before she died; she was there to write down her final wish not to have her Supreme Court justice seat filled until the next president had been elected. According to NPR, Ginsburg told her granddaughter, "My most fervent wish is that I will not be replaced until a new president is installed." And like the loving granddaughter she is, Spera has made sure her grandmother's final wish would be heard.