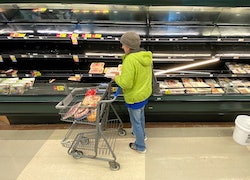 We’ve all been there. It’s New Year’s Eve and you’re ready to get the festivities started when you realize you forgot to buy the pecans for your signature cheese log! Or worse, you failed to pick up a fresh bottle of bubbly. Crisis ensues and you grab your keys to race to the grocery when you hesitate: is Kroger even open on New Year’s Eve? What about New Year’s Day? You still need brunch provisions too.

The panic is palpable when you consider spending the last night of the year (this year in particular) without the help of your favorite appetizer and something fizzy to wash it all down. I mean, as if quarantining for 10 months wasn’t bad enough, now you’re going to have to soberly watch the ball drop without the help of refined cheese? You could buy some cheap wine coolers at the 7/11 instead like your freshman year in college, but who really wants to live with that kind of hangover on New Year’s Day? No parent, that’s who.

Instead, take a deep breath. Put your car in reverse and head to Kroger safe in the knowledge that your favorite grocery is fully operational on this most important day of the year.

A rep from Kroger tells us that, provided you head to the store before midnight, you should have no problem securing the items you need. (A 2020 miracle!)