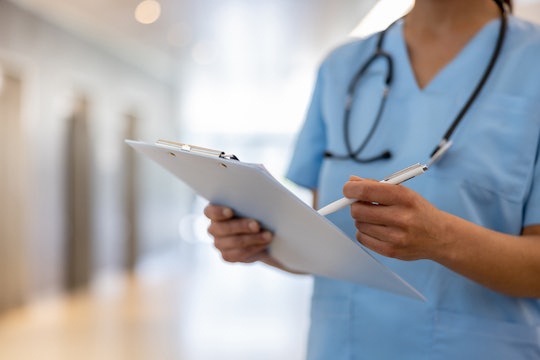 “At no time should our patients ever feel they are not being treated with care and respect.”

While delivering a baby is a monumental, unforgettable experience for parents waiting to meet the child they’re about to dedicate their lives to, for a labor and delivery nurse, bringing new life into the world is just another day at the office. It makes sense that it’s not as big a deal for them as it is for their patients. It might even make sense for them to have some inside jokes about work just like anybody else. But recently, a group of L&D nurses at Emory University Hospital Midtown in Atlanta posted a video full of complaints about patients that has many, including their employer, saying they went too far. It all went down on TikTok and here’s what’s happened since.

Last week, a video featuring four nurses from the Atlanta hospital went viral as they enumerated their various “icks” (formerly known as pet peeves before the internet updated all the words) they faced in their line of work... and since their line of work is caring for pregnant people, their icks were all about patients and their families.

“My ick is when you come in for your induction talking about ‘Can I take a shower or eat?’” the first one begins.

“My ick is when you ask me how much the baby weighs and it’s still in your hands,” another follows.

The original post is no longer available, but the video was widely shared on various social media accounts.

Other icks included offenses such as fathers asking for paternity tests, forgoing an epidural, family members going to the front desk to ask for something the patient needs (this was paired with an impression, in case you wanted to know how the nurses perceive those with the audacity to ask for *checks notes* a blanket or water for a laboring patient), and “unlimited” trips to the nurses station.

An “ick” is something that is instantly off-putting.

“Ick” is a term used on TikTok to describe behaviors or habits that are instant turn-offs when it comes to dating partners. Usually these are things that are pretty frivolous and shallow but also maybe cringey, like “trying to take selfies” or listening to your own (Soundcloud rap) music. Inconsequential things that nevertheless rub you the wrong way.

Emory released a statement about the “former employees.”

On Dec. 9, Emory Healthcare released a statement on Instagram regarding the incident.

“We are aware of a TikTok video that included disrespectful and unprofessional comments about maternity patients at Emory University Hospital Midtown. We have investigated the situation and have taken appropriate actions with the former employees responsible for the video. This video does not represent our commitment to patient-and-family centered care and falls far short of the values and standards we expect every member of our team to hold and demonstrate. At no time should our patients ever feel they are not being treated with care and respect. Every patient at Emory Healthcare deserves to be cared for by a compassionate, experienced team in a comfortable and safe environment.”

Emory released a statement about the video on Dec. 9

The hospital has not released any additional information regarding whether the nurses were terminated or left of their own accord. The wording also does not explicitly say whether all the nurses featured in the video have left (one way or another) or just those deemed “responsible.”

Public response to the “ick” nurses on social media has been harsh.

Understandably, the content of this video raised the hackles of a wide variety of folks, including those who have given birth and had similar experiences, nurses from across the country, and even some who share their own purported experiencecs at Emory Midtown. More still simply took the Twitter, TikTok, and other platforms to express their frustration with the situation.

“Someone being in labour and asking annoying questions being an ‘ick’ sounds so evil,” tweets @DijahSB. “I am sure you have to be an extremely patient person in order to be a nurse. you are dealing with people in one of the most vulnerable states a human can be in.”

“I’m a nurse and I was disgusted by that ick video,” @_QueenofPINK tweeted. “There’s no [excusing] that. [People] literally have near death experiences giving birth and those nurses were soooo insensitive.”

TikTok creator @alxrichy created a three-part video detailing her harrowing experience at Emory, (including, she alleges, with one of the nurses in the video) that resulted in delayed care, a traumatic delivery, and the birth of her son.

Many have expressed anger and sadness over the video in light of what they feel it represents more broadly.

Specifically, that this video highlights what Black women have related about their treatment by medical establishments: dismissal and unequal treatment. Atlanta is a city whose population (and, therefore, presumably, patients of Emory) is nearly 50% Black; per statistics from the Centers for Disease Control and Prevention, Black women are three to four times more at risk of pregnancy-related death than white women. “As someone trained as a doula, this (former) nurses’ ‘ick’ video going around is so upsetting,” posits @dr_lkb. “Birthing while Black is already so risky and intense…and anyone can enact medical racism against Black women. Anyone. It’s deeply upsetting to see Black women among that number.”

Twitter user @Jani__Gee sees this as another sort of institutional problem. “The fact that so many people are sharing stories of traumatic experiences from Ick Nurse Hospital means that this issue is way bigger than them,” they suggest. “Those girls needed to be fired but Emory University hospital additionally needs to do significant internal work and grow from this.”