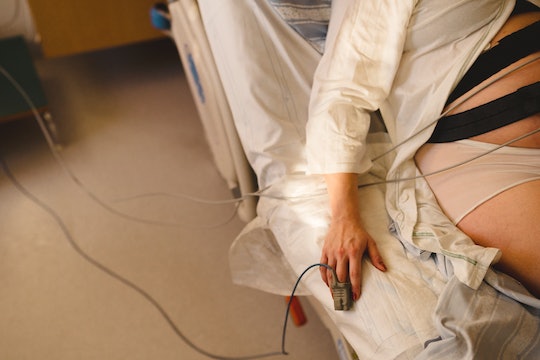 I Almost Had To Give Birth Alone. My Nurse Made Sure I Didn't.

She even kept the phone with my husband on FaceTime right in the middle of the action.

My nurse held up one of my legs as I held the other, and I started to feel that familiar crescendo — there was a contraction coming. I steeled myself for another round of pushing when I heard a clatter across the room. “My phone fell down!” I frantically cried to my nurse.

In a split second, she had repositioned my phone on its precarious spot, balanced on the plastic file holder hung at the foot of my bed, and had returned to my side just as I started pushing. My husband, joining from our home via FaceTime, thanked my nurse for fixing his view before turning to the more pressing matter. “You’re doing amazing, babe!” he said, watching me bring our son into the world from what was truly the most unflattering and graphic angle imaginable.

As soon as my husband and I discovered we were expecting when the world started to lock down in spring 2020, we began preparing for the possibility that I might birth this baby alone. When my water broke five full weeks early, before our COVID-safe and trusted family child care could arrive, we knew that scenario looked even more likely. And when my contractions began rolling in one on top of another, hours before I was set to get my second steroid shot (used to kick little George’s lung development into high gear when eviction seemed imminent) and while my husband was asleep with our toddler… well. We knew it was happening. I was going to birth this baby alone.

Earlier that day, I cried as I settled into my room in labor and delivery. Instantly, my nurse was grasping both of my hands between hers, staring me straight in the eyes. “I am here to help you through this. I am here to do whatever I can do to help you feel safe and comfortable.” Though most of her face was concealed with a mask, I could see that she was genuinely concerned for me: this emotionally fragile woman, alone in a hospital room, preparing to deliver a preemie during a pandemic. I cried harder.

We knew it was happening. I was going to birth this baby alone.

She rubbed my arm when I voiced all of my concerns about having a baby that would inevitably spend time in the NICU. She told me that he would be OK. He would be in the best hands, after all, and 35-weekers do incredibly well. She spoke with so much confidence that I instantly knew she was right.

She once again gathered my hands in hers when the anesthesiologist arrived to do my epidural and she saw my fear. I tried to remain nonchalant as I told her that this was the part I feared most, and she reminded me to breathe. I don’t typically take comfort in physical touch, yet I found myself needing her hand.

She spoke with my husband over FaceTime as I dilated from 3 to 10 centimeters in the span of half an hour. I shook violently from the rapid progression and grasped the fact that my husband would not be at my bedside for the delivery. She introduced herself as if he were in the room, and told him I was doing a great job. She made sure he could see everything that was going on, and saved the day when my phone took a nosedive mid-pushing. She understood how important it was that he felt included at every step.

She spoke my language fluently, offering both soothing words of reassurance and borderline offensive jokes in quick succession. She knew I needed equal parts comfort and comedic relief, and somehow navigated that balance as if she’d known me for five years, not five hours.

She took over 40 photographs as I labored, in between fulfilling all of her nurse duties. She even captured the moment my son emerged and was briefly placed on my chest — the kind of pictures I saw in health textbooks and swore up and down I’d never want. Somehow she knew I’d want them, and I do. I will treasure them forever.

She made sure he could see everything that was going on, and saved the day when my phone took a nosedive mid-pushing. She understood how important it was that he felt included at every step.

She wheeled me to the NICU early that morning to see my son for the very first time. I cried as I peered at him with all of those tubes and wires, his face mostly concealed by the CPAP machine. Over the NICU soundtrack of bells and alarms, she told me he was one of the cutest, chubbiest, healthiest 35-weekers she’d seen yet. I’m not sure it was true, but it was a salve that I desperately needed.

She told me, when all was said and done, that she was a mother to 27- and 29-weekers herself. As someone with the annoying habit of over-sharing personal anecdotes just to be relatable, I couldn’t believe she had listened to me panic about my 35-week-old baby without sharing this information. After all, she had faced so much worse. I realized she had listened to actually listen, instead of listening to respond.

For my nurse, it was likely just another long shift on the job. For my family, it was the night we became complete. She instantly, without hesitation, stepped into the role of support person when it became clear I needed one, and in turn she ensured that the memory of my premature, pandemic birth is, miraculously, a positive one.

When people tell me, “Wow, I could never give birth alone,” she is the reason I will always tell them, “I didn’t.”