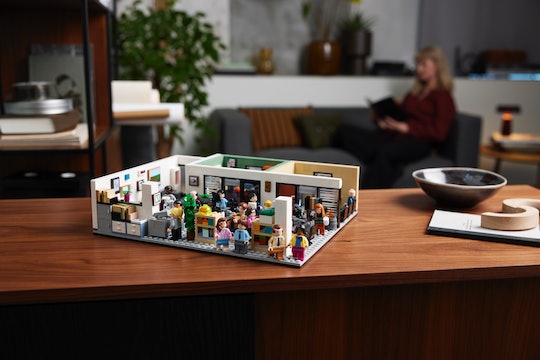 You know Michael Scott would buy it.

The Office is one of those shows that seems to bridge that hazy, complicated space between preteen and adulthood. You don’t have to be an adult to laugh at Kevin dumping his chili all over himself or Michael Scott’s Dundee Awards. And you don’t have to be a kid to play with LEGO’s new playset of The Office. Whether you’re a kid who is seeing The Office for the first time around now or an adult ready to do a deep dive into the world of a little paper company called Dunder-Mifflin in Scranton, Pennsylvania, everyone will get a kick out of this LEGO set. Particularly because the attention to detail is truly next level. The little Dwight LEGO character even has his stapler stuck in Jell-O.

The new LEGO playset is the brainchild of Jaijaj Lewis, who designed the remarkably accurate layout of the Scranton office of Dunder-Mifflin as a submission to the LEGO Ideas platform. The playset features a reception desk where Pam sat for so many years, Jim and Dwight’s desk space (and scene of many a prank), Michael Scott’s office, and even the conference room. All of the characters people recognize from the series are included, like Angela, Phyllis, Oscar, and Kelly, who is seen carrying a birthday cake to herself. A total of 15 characters are included but not Andy, who LEGO explained in a tweet wasn’t included because he was away working on his “management skills.”

Andy might not be on hand, but the rest of the staff is there with their phones and their desks and their perfectly recreated work spaces. Even the plants look eerily familiar.

The 1,164 piece set offers fans so many iconic moments to recreate, whether it’s Michael Scott holding a pointless meeting in the conference room, Dwight yelling at people through his megaphone, or Phyllis on a sales call, it’s going to be worth hours and hours of fun. There are even little accessories like the sign Dwight and Jim made for Kelly saying “It is your birthday,” a check made out to “Science” signed by Michael, and the iconic “World’s Best Boss” coffee mug.

The Office LEGO set will be available exclusively online at Walmart as of Oct. 1 for $129, but fans can preorder now at Walmart.com to make sure they get it in their hands right away.

You know Michael Scott would buy about 10 of them and host a LEGO party in the conference room to celebrate if he could.