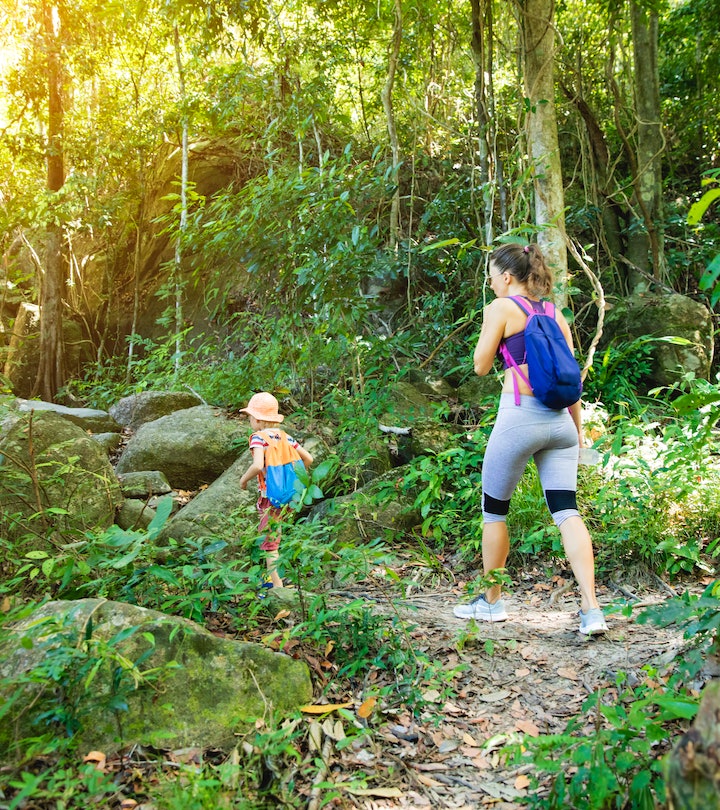 How To Avoid & Treat Lyme Disease

All about Lyme disease, including what to do if you think you have it.

These days, any time you or your kid is feeling a bit off you’re probably wondering right away whether it’s a random kid cold or something more. During the summer months especially, there’s yet another illness to be looking out for: Lyme disease. Especially if you’re traveling with your kids in the Northeast, Northwest, or Upper Midwest, being aware of the possibility of Lyme disease is extra important. Recognizing Lyme disease symptoms, and how Lyme disease presents in children can help you either prevent it in the first place or catch it early. Adding one more thing to your plate during the tiring summer months — a time of rampant mom burnout — isn’t what anyone wants to do, but protecting your family and yourself from Lyme can actually be pretty straightforward.

Lyme disease was first discovered in the mid-1970’s, when a group of children and adults in a Connecticut town began experiencing symptoms that presented like arthritis. That town was Lyme, Connecticut — which is how the disease got its name. There are “nearly half a million people are diagnosed with Lyme disease each year, and approximately two million people are currently living with late-stage Lyme disease” according to Linda Giampa, the director of the Bay Area Lyme Foundation. A little knowledge of Lyme symptoms and prevention can be really helpful in making sure your family has a safe, fun summer that doesn’t include this unwelcome infection.

What is Lyme disease?

Lyme disease is a bacterial infection that is caused by one of two types of bacteria, both of which are a real mouthful. Most commonly, Lyme disease is caused by a spiral-shaped bacteria called Borrelia burgdorferi and less often by Borrelia mayonii, says Dana Mordue, an associate professor of pathology, microbiology and immunology at New York Medical College, tells Romper. The Centers for Disease Control and Prevention (CDC) notes that Lyme disease is “the most common vector-born illness in the United States.”

How do you get Lyme disease?

Lyme disease is transmitted through the bite of an infected tick, most often a baby tick called a “nymph” (a cute name for a not-so-cute thing). Mordue explains that it often takes 36-48 hours in order for the pathogen to be transmitted, though it’s still important to do daily checks because infection can happen in a shorter time. “That is one reason it is so important to check yourself for ticks after potential exposure to an environment likely to have ticks,” she explains.

So what environments have ticks? “Ticks tend to be near the ground, in leaf litter, grasses, bushes and fallen logs. High risk activities include playing in leaves, gathering firewood and leaning against tree trunks,” explains Dorothy Leland, board president of LymeDisease.org. Yet even if you’re not doing any of that, you’re not completely in the clear. Ticks can be in a local park or your yard too, or even take a ride into your house on your dog. Watching out for ticks throughout the summer, no matter what you’re doing, is important.

How do you know if you have Lyme disease?

This turns out to be a slightly trickier question than you might think. Even if you’re diligently inspecting your skin and clothes, you may not always know if you’ve been bitten by a tick. “Ticks can be the size of the period at the end of this sentence, so if even if you don’t see the tick or the tick bite, you should seek advice from a medical professional familiar with Lyme disease if your child has symptoms of Lyme disease,” explains Giampa.

A “bulls-eye” rash has long been considered to be a tell-tale sign of lyme, but that isn’t the only shape the rash can take. “The most common appearance of a Lyme rash is a uniformly red expanding rash, often round or oval, though it may have different shapes and additional features. Its color may be pale pink to salmon to deep red or sometimes even a bruise-like appearance,” Dr. Beatrice Szantyr, a Maine-based pediatrician and Lyme disease educator, tells Romper. However, there’s an added complication — not every case of Lyme disease presents with a rash. “Not everyone with Lyme disease gets or remembers a rash. CDC data for a 10 year period revealed a rash was reported in 70% of confirmed and probable cases...so 30% of cases did not have a rash,” Dr. Szantyr explains. Further, she notes, ticks often attach in area of the body that’s hard to see “by the ankles, behind the knees, in the groin area, at the waist band and belly button, at the bra line, in the arm pits, behind the ears, or in the scalp.” A rash in those areas could be easy to miss, particularly if it’s a subtle rash, as many are.

There are tests for Lyme disease though, Szantyr explains. “It takes two-to-eight weeks to develop a measurable antibody response.” If you’re presenting with Lyme symptoms, your best bet is to immediately seek out care.

How does Lyme disease present for different age groups?

There isn’t one age group where Lyme presents more or less severely: Lyme disease presents similarly in babies, kids, and adults. However, Mordue notes that “ there is substantial variability of disease presentation and severity between people.” In other words, two siblings who are both bitten by a tick while out in the woods may have very different symptoms. Children, however, are more likely to get it than adults since children typically spend more time outdoors, and because tall grasses are proportionally taller for young children.

Fatigue, headache, and fever are common symptoms of early Lyme disease. Joint pain is another potential symptom: “Some children may present with a swollen, painful joint as their first symptom of Lyme disease, though this is considered a later manifestation,” Szantyr explains. “While the knee is most commonly written about, it can be wrists, elbows, hips, ankles, even the TMJ. If your child is old enough to tell you something hurts, take note, write it on the calendar, check their temperature and remember what you have been doing and whether there is a possibility of tick exposure For younger children, notice if they are limping, if they are not playing in their usual way, if they seem a little less like themselves.”

Children with late-stage Lyme may present with behavior issues or have trouble in school. Dorothy Leland, who wrote the book When Your Child Has Lyme Disease: A Parent's Survival Guide after her own daughter had suffered from late-stage Lyme, explains that in her experience, untreated Lyme can cause “a gamut of puzzling symptoms in children, including pain, fatigue, gastrointestinal upsets, learning disabilities, behavioral issues and psychiatric problems.”

Parents should be especially aware of “chest pain or any cardiopulmonary symptoms (weakness, shortness of breath, dizziness),” Szantyr suggests. These worrisome symptoms can indicate a serious condition called Lyme carditis, which occurs when the Lyme bacteria enters the tissue of the heart. You should seek emergency care if your child exhibits those symptoms, or has a fever with headache and stiff neck, which can indicate Lyme meningitis.

How is Lyme disease treated?

The first step in treating Lyme disease to get antibiotics. “Standard treatment is oral antibiotics, specifically doxycycline for 14-21 days for adults and for children over eight years of age,” Mordue explains. “Cefuroxime or Amoxycillin can be used for adults, pregnant women and younger children. Intravenous antibiotics may be used if the disease appears to have spread to the central nervous system.”

Parents should closely monitor their children to determine whether their children’s symptoms have resolved, Szantyr suggests. “It is very important to have follow-up after treatment for Lyme disease to make sure all of the symptoms and signs have completely resolved, and the child is back to their pre-illness wellness. If not resolved, immediate re-treatment with antibiotics is a sensible next step.”

Several Lyme advocacy organizations focus on patients who have not gotten better after the standard course of treatment. “Approximately 10 to 20% of patients treated for Lyme disease with a standard antibiotic treatment will have lingering symptoms of fatigue, pain, or joint and muscle pain,” notes Giampa.

What steps can you take to prevent getting Lyme disease?

One of the most crucial is inspecting yourself and your children for ticks. If you do find a tick, don’t just pinch it with your fingers and yank. Instead, carefully slide a pair of pointy tweezers between the skin of the person and the tick's mouth. Pull the tick straight up and away from the bite site. Contact your health care provider for further guidance about new steps.

To avoid getting ticks on you to begin with, you can buy clothing that’s been treated with permethrin (or spray it yourself), a substance that repels ticks. Also, the same bug repellant you use to repel mosquitoes can be helpful in preventing ticks to begin with. Leland recommends throwing your clothes in the dryer for ten minutes, and taking a shower once you’re done with your hike or camping trip.

Though Lyme disease can feel scary, a little preparation before spending time outdoors, and some vigilance afterwards, can help greatly mitigated your risk.

Dorothy Leland, board president of LymeDisease.org, co-author of When Your Child Has Lyme Disease: A Parent's Survival Guide

More Like This
Everything Parents Need To Know About Monkeypox
10 Last-Minute Summer Getaway Ideas For Families
Late-Summer Gardening Tips For Beginners
How Hot Is Too Hot For Babies? Experts Weigh In