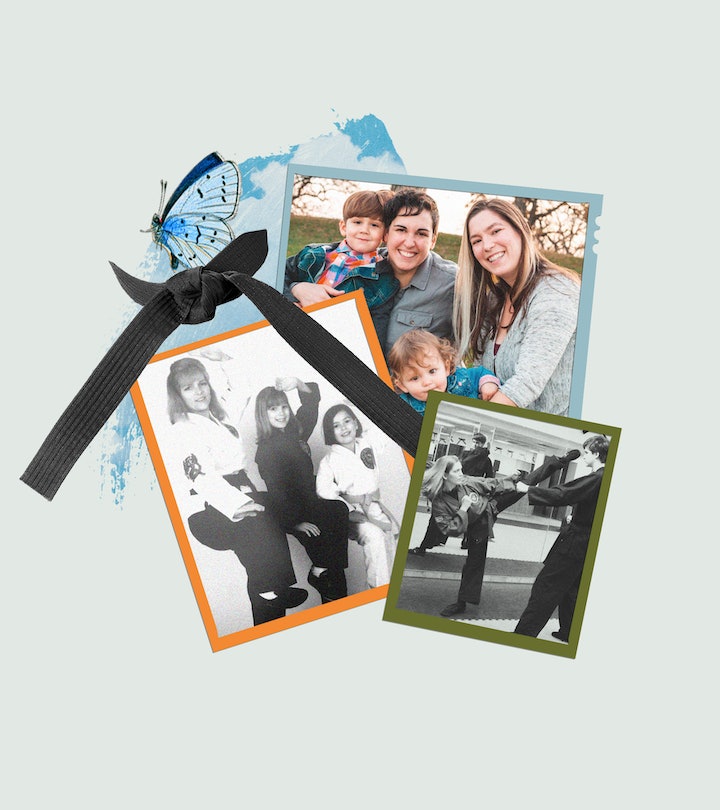 After black belts have kids — mothers and fathers alike — they usually leave martial arts. Classes are scheduled on evenings or weekends, which is peak family time. And by the time kids have grown a little and become more independent, parents are out of the habit and out of practice. The nostalgic ones enroll their kids and experience it from the lobby.

I’ve been a martial artist for over 30 years, and before I became a mother, I vowed that would never be me. My wife carried our first child, and I trained regularly after he was born. Even when I was pregnant with our second child, I continued to teach and practice at the dojo I co-own. Once, after demonstrating how to throw a large man off me from a ground pin in a self-defense class, I declared, “I can create life, and I can destroy life!” I felt like a superhero.

When the pandemic forced us to close for more than a year, we pivoted to online instruction, and I kept going. Baby bump and I hosted kickboxing via livestream. “Who needs prenatal yoga?” I joked.

In some ways, it felt like destiny. My mother is a seventh-degree black belt who ran her own school for over 20 years. She took a lot of abuse in a toxic, male-dominated industry at a time when her contemporaries openly argued that there is no place for women in the martial arts. At home, she was Mom, but at the dojo, I called her Master Murphy. I was proud to follow her example.

Then, suddenly, in my third trimester, pubic symphysis pain set in. Every step felt like someone was attacking my pubic bone with a metal pipe. The stances we take in martial arts — feet spread wide and weight dropped low — were the most painful positions possible. Eventually, I had to stop.

It was summer of 2020. I was huge, hot, and hobbled. I found out my baby was breech, and after trying everything possible to turn her (she’s a stubborn child), I ended up having a C-section. It was brutal.

I had prepared myself mentally for an active birth. Instead, I lay naked and immobilized while a team of highly skilled strangers removed my baby, then some organs, then shoved those organs back into place before sewing me up. At least that’s what the anesthesiologist told me was happening behind the curtain. Afterward, while everyone celebrated my sweet baby, it hurt to move, to hold her, to breastfeed. My body was swollen and tender. I couldn’t sit up or stand. It felt like someone had beaten the shit out of me. And I don’t like to lose a fight.

One of our mantras in martial arts is “move from your center.” My center was a ghost of what it had once been.

The doctors and nurses told me that recovery would take six weeks, but I would discover that true recovery from this major surgery — not to mention pregnancy — would take at least a year. I had significant abdominal separation and a lingering numbness from my belly button to my pubic bone. I couldn’t balance on one leg or do a push-up, things I had done as easily as breathing since I was a tiny child. I felt demoralized, depressed, and utterly lost. I didn’t know who I was without martial arts.

I continued to teach, but I felt like an impostor. My brain still knew what to do, but my body just didn’t respond like it used to. One of our mantras in martial arts is “move from your center.” My center was a ghost of what it had once been. Weak. Disconnected. Empty. Movements that were once natural felt strained and awkward. Between work and two toddlers, I didn’t have it in me to do more than go through the motions.

I’m not sure how long that state of affairs would have lasted, but, this past summer, when the baby I’d birthed was approaching her second birthday, it came time to schedule a black belt test for students at our studio. I knew — at least in principle — that I should be part of it. I had put in the hours training, teaching, and leading a school as a fourth-degree black belt. It was time to earn my fifth-degree and the title of Master of Shaolin Kempo Karate. I also knew this would require more of me than I had been putting in, and I questioned whether the time and effort would be worth it. Could I get back in fighting shape in the six or so months I’d have until the test? Did I even want to?

I answered myself immediately: Yes. A lot had changed since having kids, but the part of me that wanted this and had worked toward it for years was still there. So two years postpartum and one year after reopening my dojo, I’m committed to training to become the next Master Murphy in February 2023.

A black belt test is a rite of passage. Doing this now feels like an audacious bet on myself. Passing this test, and getting promoted to master level means taking my place publicly as one of the leaders of our system of martial arts. Training at this level isn’t easy; it means negotiating support from my wife so I can attend one class each week. It means squeezing in training between meetings or when I’m exhausted after putting the kids to bed. It means telling everyone what I’m doing, in the name of accountability, and being sustained by every “you got this!”

Most of all, it means recommitting to myself — the me before kids. I’m healing my body and my spirit. It’s like I’m shedding layers of pandemic parenthood and postpartum despair and being reborn as the confident, centered, decisive, assertive, energized lifelong martial artist that I am.

Every day with toddlers is a struggle. They have so many needs. Well, I need this. And I know my kids will be proud, just like I’ve always been fiercely proud of my own martial artist mama.

More Like This
I Had Bariatric Surgery & Can Say The New AAP Guidelines Will Harm Kids
Why You Should Go Ahead And Have That Fourth Baby
Julia Fox's Apartment Tour Made My Nipple Hairs Stand On End
I Took Drinking Out Of My Bedtime Ritual & Unfortunately, It's Great
What Parents Are Talking About — Delivered Straight To Your Inbox