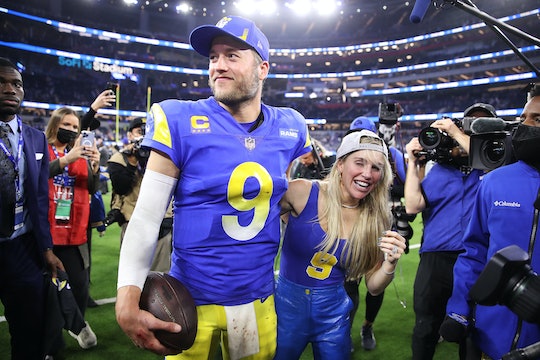 The Los Angeles Rams quarterback is one lucky guy.

Los Angeles Rams quarterback Matthew Stafford, 34, has five reasons to be thankful as he prepares to lead his team in Super Bowl LVI against the Cincinnati Bengals on Feb. 13.

Those reasons are his wife, Kelly Hall, and their four daughters; Tyler, twins Chandler and Sawyer, and Hunter. Needless to say, Stafford is part of the girl dad club and his wife is a superhero in her own right.

Matthew and Kelly met while attending the University of Georgia. Stafford was the star quarterback and Kelly was the cheerleader. The two tied the knot in April 2015 and have been stuck together by the hip ever since.

Kelly is a brain tumor survivor

Aside from being a supportive wife, Kelly has faced her own battles and triumphs. The 32-year-old is a brain tumor survivor. In April 2019, Kelly underwent surgery to remove a benign tumor called an acoustic neuroma. She documented her journey in a first-person essay for ESPN.

Doctors had told her there was a 50% chance she could lose her hearing and facial function but Kelly was determined to overcome the odds and be here for her children.

“What if this thing gets taken out and something goes wrong?'' she wrote. "What if something happens before that? My biggest fear is not being here, and not being here to raise my girls.

Kelly said after the procedure she had to relearn how to walk but Matthew never left her side.

“Matthew was incredible during the whole process,” she wrote. “He was literally by my side at every step.”

Last February, she celebrated two years of being brain tumor-free.

“Two years ago today, I heard a doctor tell me loud and clear that I had a brain tumor,” she captioned a post of her and Matthew, “everything after that was more like a mumble. Fast forward two years later, I couldn’t be more grateful for where I am at in life.”

Kelly has a podcast

The mother of four is the podcast host of The Morning After: Matthew Comes Home to a Shit Ton of Halloween Decorations, available on Apple and Spotify.

Matthew is a Disney dad

Not only is Matthew a girl dad he is a Disney one too- at least by default. Past times included posing with his daughters in their Disney gowns and trips to Disneyland of course.

Are his daughters, of course!

We love to see it! #StaffordStrong