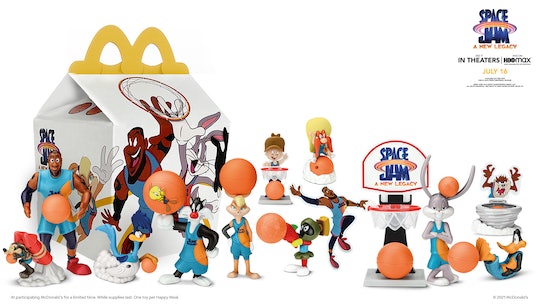 The year was 1996 and Michael Jordan and Bugs Bunny starred in the most epic basketball movie, ever. Now in 2021, the long-overdue sequel, Space Jam: A New Legacy has arrived and McDonald’s is celebrating with some amazing new Space Jam Happy Meal toys. The best part is that even though they’re made for the sequel, these toys still have some serious 1996 vibes.

While LeBron James has graciously taken over the pro basketball player role in the sequel, the rest of the Tune Squad team has pretty much gone unchanged with players including Bugs Bunny, Porky Pig, Elmer Fudd, Lola Bunny, Yosemite Sam, Daffy Duck, and more. There are 12 new Happy Meal toys, each a different character from the film (including LeBron) rocking their updated uniforms and a basketball, and the classic Happy Meal box has also been made over with new images from Space Jam: A New Legacy. While their outfits may have been slightly altered, the nice thing about cartoons is that even 25 years won’t age them, so the 2021 toys look very much like the ones you probably had back in the 90’s.

McDonald’s is giving you all kinds of chances to share your love of Space Jam with your kids (and the world) because, in addition to getting an awesome new toy, you also have a chance to win a Space Jam: A New Legacy limited-edition basketball jersey with the purchase of a Happy Meal. You can enter to win by adding a Happy Meal to your order via the McDonald’s app July 6-12 or to your Uber Eats order July 13-15.

As with all Happy Meal toys, you’ll want to get these ones while you can because once the stock has run out, they’ll be gone. Basically, this is a totally valid reason to order the kids and yourself a few Happy Meals over the next few weeks.

And, just as a reminder, Space Jam: A New Legacy will be out in theaters and on HBO Max starting July 16 (so be sure to catch up on the original movie one more time before then).