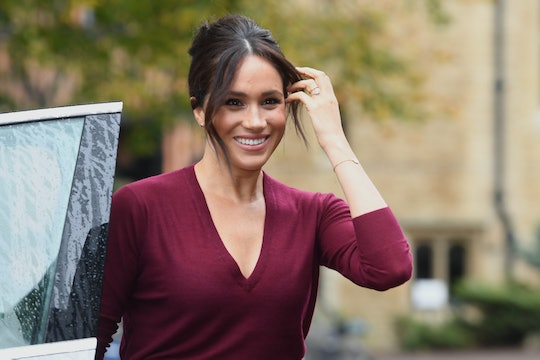 The Duchess of Sussex has reportedly placed calls to Sens. Shelley Moore Capito and Susan Collins and possibly others.

A handful of U.S. senators have reportedly picked up the phone recently to find Meghan Markle on the other line. The Duchess of Sussex is reported to be calling senators to encourage them to support the inclusion of paid family and medical leave in President Joe Biden’s social spending bill.

According to Politico, Markle has called at least two senators directly to advocate for paid family leave. “I’m in my car. I’m driving,” Sen. Shelley Moore Capito, a Republican from West Virginia, told the news outlet of receiving a call from the mother of two. “It says caller ID blocked. Honestly... I thought it was Sen. Manchin. His calls come in blocked. And she goes ‘Sen. Capito?’ I said, ‘Yes.’ She said, ‘This is Meghan, the Duchess of Sussex.’”

Although Capito didn’t dive into the specifics of her conversation with Markle, she did tell Politico she had no idea how the Duchess of Sussex got her number. Sen. Susan Collins, a Republican from Maine, also reported getting a phone call from Markle.

“Much to my surprise, she called me on my private line and she introduced herself as the Duchess of Sussex, which is kind of ironic,” Politico reporter Marianne LeVine quoted Collins as having said. “I was happy to talk with her. But I’m more interested in what the people of Maine are telling me about it.”

Members of Congress have recently struggled to find common ground on the issue of paid family and medical leave. Last week, Senate Democrats quietly cut out funding for such a policy after Sen Joe Manchin, a key centrist, refused to back the proposal. House Speaker Nancy Pelosi, however, has since moved to return language guaranteeing workers at least four weeks paid family and medical leave despite Manchin’s continued opposition.

But this isn’t the first time Markle has reached out to members of Congress to advocate for paid leave. In October she wrote to Majority Leader Charles Schumer and Speaker of the House Nancy Pelosi to encourage Congress to put families before politics and pass a federal paid leave program. “If we’re going to create a new era of family first policies, let’s make sure that includes a strong paid leave program for every American that’s guaranteed, accessible, and encouraged without stigma or penalty,” Markle wrote in her letter. “No family should have to choose between earning a living and having the freedom to take care of their child.”

The Duchess of Sussex, who shares two children with Prince Harry, argued paid family leave should be considered “a national right” rather than something limited only to those who live in one of the nine states (or the District of Columbia) that already have paid leave laws of some kind. “When paid leave is a right, we’re creating a foundation that helps address mental health outcomes, health care costs, and economic strength at the starting line,” she wrote.