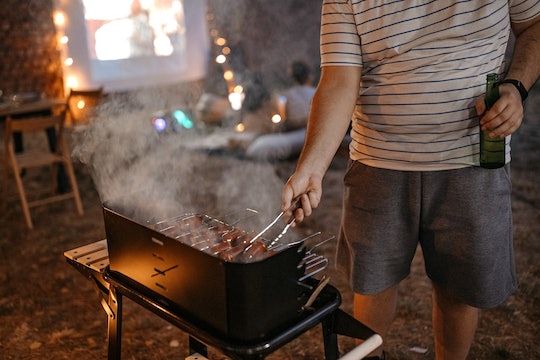 Parenting was a hot topic!

Merriam-Webster might be one of the oldest English dictionaries around, but just because it’s about 190 years old doesn’t mean they are getting left behind. Indeed, the dictionary is all about updating language with the times. This year, Merriam-Webster added 455 new words to the 2021 official dictionary, some of which are genuinely affirming for what it’s like to parent in our new reality.

Parenting Words For The Win!

On Wednesday, Merriam-Webster announced its new additions to the dictionary for 2021, and there were a few popular parenting terms included in the mix. “Babywearing,” for instance, was defined as “the act or practice of holding an infant against an adult's torso by using a supporting device (such as a baby carrier) that buckles or ties onto the adult's body.”

Another parenting addition was “fourth trimester,” defined as “the three month period immediately following giving birth in which the mother typically recovers from childbirth and adjusts to caring for her infant.”

While both of those terms are pretty familiar to parents, it takes time for them to filter through social media and into the official dictionary. Merriam-Webster’s editor-at-large, Peter Sokolowski told TODAY Parents, “If a word is used frequently in publications such as The New York Times or The Atlantic, then it goes into the dictionary. We need to see it appear in carefully edited prose over a period of time — and not just in memes and on social media.”

“Dad bod” is now an official term in the dictionary, describing “a physique regarded as typical of an average father especially: one that is slightly overweight and not extremely muscular.”

Some other pop culture phrases added to the dictionary were “amirite,” the slang phrase often used in place of “am I right?,” the common abbreviation for “to be honest” we all know as “TBH,” and “FTW” which stands for “for the win.”

Food Was Not Forgotten

There were plenty of additions in the food department including “fluffernutter,” described as “a sandwich made with peanut butter and marshmallow crème between two slices of white sandwich bread,” and everyone’s favorite 2021 appliance the air fryer, “an airtight, usually small electrical appliance for quick cooking of foods by means of convection currents circulated rapidly by a fan.”

Merriam-Webster continues to update vocabulary as the world changes. In 2019, for instance, the dictionary added “screen time” as its own official term. That year also gave us the pronoun “they” as the word of 2019. And of course, with the advent of the coronavirus phrases like “long hauler,” “pod,” and “wet market” became part of our vernacular in 2020.

The times continue to change. And so does Merriam-Webster’s dictionary.

More Like This
35 Aquarius Instagram Captions To Celebrate Your Special Season
Barbie Honors Aviator “Queen” Bessie Coleman In Their Inspiring Women Line
Teacher Shot By 6-Year-Old Student Told School He Had A Gun, Was Told To "Wait"
A Dad Asked Reddit If His Wife’s “Casual” At-Home Wardrobe Was Setting A Bad Example
What Parents Are Talking About — Delivered Straight To Your Inbox