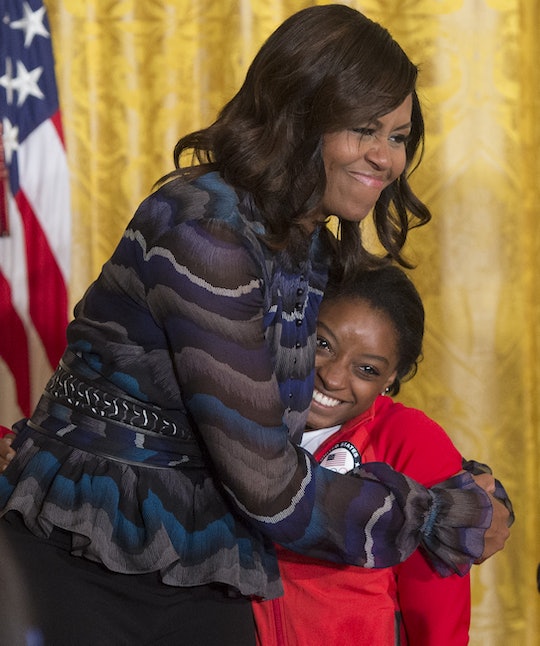 “We are proud of you and we are rooting for you.”

Former First Lady Michelle Obama has been rooting for Simone Biles ever since the 24-year-old Olympian first flipped into America’s heart. So of course she was there to offer words of encouragement and support to Biles after she made the bold and brave move to voluntarily withdraw from competing at the Tokyo Olympics to focus on her mental well-being.

On Tuesday, after performing her vault routine, Biles announced that she would be stepping back from the team finals to focus on her mental health. “Physically, I feel good, I'm in shape,” Biles said during an interview with Hoda Kotb. “Emotionally, that kind of varies on the time and moment. Coming to the Olympics and being head star isn't an easy feat, so we're just trying to take it one day at a time and we'll see.” While speaking with reporters, Biles said that she is “just dealing with some things internally.”

The following day, USA Gymnastics announced in a statement that Biles has withdrawn from the individual all-around competition and applauded her for her “bravery in prioritizing her well-being.”

Fans, fellow Olympians, celebrities, as well as Mrs. Obama quickly showed their support for Biles. “Am I good enough? Yes, I am,” Obama tweeted. “The mantra I practice daily. @Simone_Biles, we are proud of you and we are rooting for you.”

The Becoming author has always been a constant supporter of Biles. In May, for example, she tweeted a video of the Olympian and captioned it “always amazed by you.”

The admiration seems to be mutual. In a 2016 interview with People, Biles pointed out Mrs. Obama as one of her role models. “For me, as an African American woman, something she said that I took to heart was ‘When they go low, we go high,’” Biles told People at the time. “Sometimes you have to be the bigger person. That'll always stick with me, especially being an African American. I like that one a lot.”