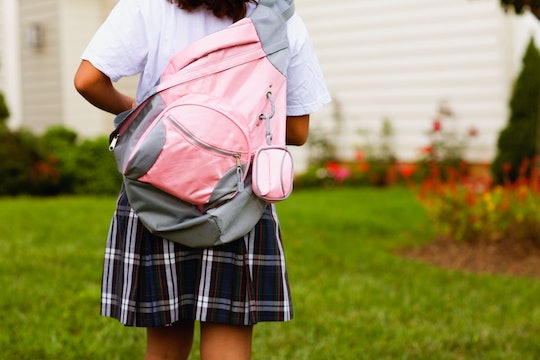 The school has since acknowledged “how this type of information causes serious concern from parents.”

Mom of two Ashley Heun was stunned when she received a letter from her 13-year-old daughter’s school about body image. Counselors at Southaven Middle School in Southaven, Mississippi sent letters home to parents on the subject of a healthy body image for girls. Not boys, just girls. What was their plan to help young girls with their body image? Literature and shapewear.

Heun, who has a daughter in the 8th grade at the middle school, shared a photo of the letter, entitled “Why Do Girls Suffer From Body Image?” on Twitter. It was given to girls in class, according to Heun, and read: “Body image is a perception of one’s body and, simultaneously, a measure of one’s attractiveness. Female body image is a product of personal, social, and cultural experiences, and often emerges as a desire to adhere to an ‘ideal’ body shape.”

After noting that girls were more likely than boys to struggle with negative body images, the letter went on to list all of the benefits of a healthy body image for girls, including “good physical and mental health.” Negative body image could see them struggling with “mental health conditions, such as eating disorders and depression.”

Encouraging girls to feel good about their bodies is undeniably an uphill battle for many; a 2008 New York Times study found that half of girls aged 11-17 believed they were overweight and felt bad about their bodies. Modeling body comfort, listening to their struggles, and encouraging them to be confident exactly as they are can help, the Child Mind Institute explains. Offering middle school girls shapewear, however, does not.

“We, the counselors of Southaven Middle School, would like to have an opportunity to offer some healthy literature to your daughter on maintaining a positive body image,” the letter continued. “We are also providing girls with shapewear, bras and other health products if applicable.”

“I’m appalled at the fact that they are trying to fix ‘negative body image’ by sending home SHAPEWEAR!” Heun tweeted.

A Mississippi school offered shapewear as a solution to negative body image.

Parents were invited to check the box to indicate their interest and also the size of the shapewear their daughter might need. “I had to read it a few more times, to make sure I was actually reading what I was actually reading. I mean, I was shocked, I was absolutely shocked. And honestly, I was angry,” Heun told USA Today.

Heun reached out to Principal John Sartain with her concerns via email, who called her to explain that the school had received a donation of shapewear and bras and was offering them to students free of charge. “While I know they had good intentions, it was just very ill conceived,” Heun told USA Today. “And I appreciate the fact that they want to help, because there are girls out there who don't have access to bras or other essential items, for whatever reason.”

It seems Heun wasn’t the only parent to find fault with the letter, and the school decided to shut down the program immediately. While Romper’s request for comment was not immediately returned, Southaven Middle School shared a statement with TODAY. “The district has been made aware of the parental permission form sent to parents by Southaven Middle School,” Lauren Margeson, the DeSoto County Schools’ assistant to the superintendent, told TODAY. “District officials understand how this type of information causes serious concern from parents.” Romper has reached out to Southaven Middle School for comment and is waiting for a reply.

In light of this experience, Heun told TODAY that she plans to “advocate for any girl who feels ‘less than’ because of her body size.”

More Like This
"Crybaby Ambulance" In Europe Will Help Exhausted Parents
Reddit Applauds Mom Of Five Who Stood Her Ground & Left Sleeping Dad Behind
13-Month-Old Got Booked On Separate International Flight From Parents
Little Miss Memes That Speak To Our Mom Souls...