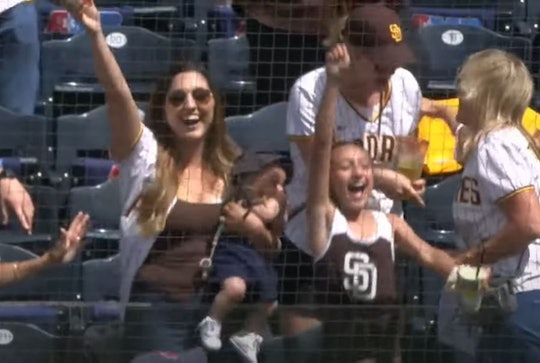 Reason # trillionth and beyond why moms are the ultimate multitaskers!

One mom in California put her expert multitasking skills on display when she caught a foul ball that flew into the stands during a baseball game while casually holding her 3-month-old son in her other arm.

Lexy Whitmore attended the San Diego Padres and Chicago Cubs game on June 9, according to NBC 7. When a foul ball went into the crowd, 30-year-old Whitmore caught the ball in one hand while holding her baby boy, Maverick, safe and sound in her other arm. Once she realized she caught the ball, Whitmore jumped up and down in excitement while Maverick look as cool as a cucumber with his thumb in his mouth.

The motherly catch was captured by the Padres and shared on the team’s Twitter page with the caption, “Moms are amazing.” The video has been liked over 3,400 times on Twitter and viewed over 36,000 views on YouTube.

This is actually not this California mom’s first rodeo with this specific talent. Whitmore, who also has a 9-year-old daughter named Lily, told FOX 11 that she plays softball with her daughter with her son in her arms. “We would be practicing and playing catch,” she said. “And I would have Maverick in my arm.” So needless to say, Whitmore was prepared when it was her time to shine.

Folks on Twitter have been giving the multitasking mom her kudos. “They should change their name to the San Diego Madres on Mother’s Day every year,” one man tweeted. Another one tweeted, “I think mom has earned a trip to the All-Star game.” One more commented, “Moms are great at many things. Nice catch,”

And although the San Diego Padres lost to the Chicago Cubs 3-1 that day, it surely was a victorious moment for Whitmore and, of course, baby Maverick.