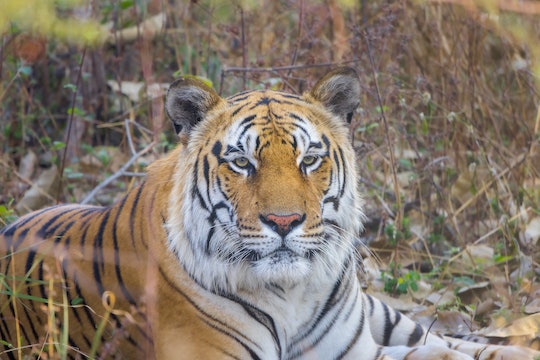 It tried to snatch her baby several times.

After a tiger strayed from the Bandhavgarh Tiger Reserve in India over the weekend, a 25-year-old mom found herself fending it off as it attacked her toddler. With her bare hands, no less. Because even a massive tiger is no match for the protective instincts of a mother trying to defend her child.

Archana Choudhary of the Madyha Pradesh region in central India was standing outside of her house with her 15-month-old son on Sunday night when a tiger pounced on the two of them. According to The Times of India, the tiger, who had reportedly strayed from the nearby reserve, attempted to sink its teeth into the head of her toddler but Choudhary stepped between them. She used her bare hands to get her child’s head out of the tiger’s mouth while screaming for help. The publication reports that the tiger retreated but continued to snatch the toddler even as she fought it off. Villagers eventually heard her screams and came to her rescue as the tiger retreated into the bushes.

Choudhary and her baby were taken to a nearby hospital where they were treated for their injuries. The little one had deep gashes in his head while Choudhary suffered punctured lungs and deep wounds to her abdomen. “She has been admitted to the hospital. She is out of danger and recovering. The baby is also doing fine,” local official Sanjeev Shrivastava told AFP, as reported by CBS News. Villagers have been warned by authorities to stay indoors as a search is underway for the tiger in an effort to relocate it back to the reserve.

Tiger attacks in villages close to the reserve are not unusual, according to the BBC, particularly since rapid urbanization has lead to natural habitats being destroyed. This has seen more wildlife like tigers and even elephants entering villages that are close to forests in an effort to find food and shelter. And, unfortunately, more attacks on humans.

Just last month, a man was killed by a tiger in front of witnesses, including his own wife, in a village in West Bengal close to the Sunderbans Tiger Reserve, per The Times of India.

Archana Choudhary’s courage in fighting off a tiger to protect her son is incredible. And fortunately, both mother and son were able to escape with their lives.