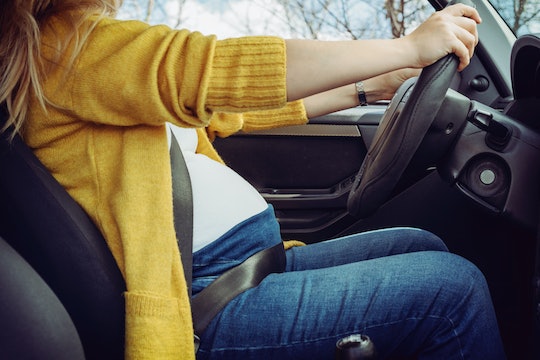 Mom Gave Birth On The Side Of The Road... With Her Five Other Kids In The Car

She “got out of the car, went to the other side in the grass and literally had a baby.”

Heather Skaats was still three weeks away from her due date when she started to experience light contractions. Skaats had already given birth to five babies and thought she knew what to expect and had a bit of time before Baby #6 arrived. Well, she was wrong and became a mom of six on the side of the road, giving birth to her baby boy on her own while her five older kids sat in the car.

The Kentucky mom shared her wild adventure in a viral Facebook post on May 15, explaining that the “wonderful water birth” she was planning as she had with her other kids did not, in fact, come to pass. “I was literally driving in the car with all the kids when I felt like I needed to pull over,” she wrote. “Got out of the car, went to the other side in the grass and literally had a baby. It was so quick! I only thought these things happened in movies!”

She went on to explain that her husband was “not too happy” about missing the birth, but that he was on the phone with her when she suddenly said, “I’m going to have a baby on the side of the road.” She was right. Her baby boy arrived and she found herself in an unusual position. “I then proceeded to drive to the house with him still attached where my midwives arrived about 10 minutes later. And then we had to pick the grass off him,” she shared.

Skaats told TODAY Parents that she thought she had enough time to run a few errands before giving birth since her contractions were so light and her due date wasn’t for another three weeks. “I thought I wouldn’t have a baby in my arms until eight or ten hours later,” she explained. That’s the life of a mom; even when you’re in labor for your sixth child you still need to think about getting a few things done.

Precipitous labor, which is essentially any time a person give birth generally after three hours of labor, can be pretty scary. As Skaats described, she felt a sudden need to pull over and push, and she was caught off guard by how fast everything went. “I was literally just out in the barn feeding horses 20 minutes before he came out. It was that fast,” she wrote on Facebook. Fortunately her baby boy is healthy at home with the rest of the family, even if he doesn’t yet have a name. Although one of her other children had a great suggestion for this little boy who was in such a hurry to come out into the world. “Austin wants to nickname him The Flash!”

More Like This
Can You Do Zumba While Pregnant? Experts Weigh In
20 Perfectly Proper Tudor Baby Names
What You Need To Know About Eating Burrata During Pregnancy
This Reddit Post About Two Sisters In A Fight Over Breast Milk Is Complicated & So Sad