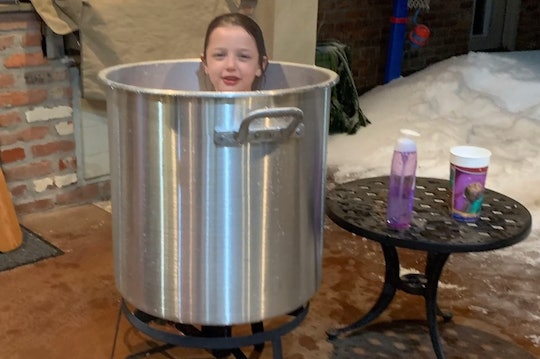 "The idea just suddenly came to me that we had the giant crawfish pot."

No running water. Five kids.... who need to get clean. It sounds like one of those awful panic dreams we all have in the middle of the night where we startle ourselves awake and quickly think, phew. Except it wasn't a dream for Marie Elise, so she got down to business. This Louisiana mom melted snow in a crawfish pot for her kids' bath when their family lost water and of course it's going viral because fellow parents are stunned and impressed by her ingenuity. And energy.

Elise and her family live in Shreveport, Louisiana, a city not far from the Texas border. Shreveport was recently hit with extreme weather conditions, wreaking "havoc on the city’s water system causing numerous water main breaks," according to local radio station KEEL. Elise tells Romper she and her family "went without running water for five days" when she started to think about how to get her kids clean.

"Some of my friends were boiling snow on the stove to do sponge baths," she says. But she decided to go a different route. "The idea just suddenly came to me that we had the giant crawfish pot."

With their giant pot at disposal, Elise and her husband decided that they could gather up some of that snow to make a fun bath for their four older kids: 6-year-old Elise, 4-year-old twins John and Judson, and 2-year-old Phillip. How did her kids feel about being bathed in a big crawfish pot? According to Elise, "The kids thought it was silly and fun."

The result was pretty amazing, as she shared in a short video on Facebook that's gone viral.

A mom made her kids snow baths when she lost water.

The video sees Elise and her husband outside gathering up snow and heating the crawfish pot to melt it before bringing the kids outside for a little personalized hot tub experience. "I thought it would be fun for the kids and a funny idea to video and send to our family," Elise says. It was a funny idea that many more people enjoyed outside her family, too.

Her sister Danielle certainly thought it was funny, sharing a photo of her niece in the crawfish pot on Twitter. "Y'all... I cannot. I'm dying. With no water service, my sister just used their crawfish pot to melt snow and warm up the water in order to give the kids a bath tonight," she tweeted. After her tweet went viral, Elise's sister shared a bit more info on the process. "One quick note for anyone who may try this," she tweeted. "Once the snow melted they had to put the whole pot on top of frozen snow to cool the bottom on the pot so it wouldn't burn the kids.

Elise and her family have water again, but the city of Shreveport remains under a boil water advisory. Fortunately she knows she definitely has a pot big enough to pull that off. If only crawfish pots came in adult size.