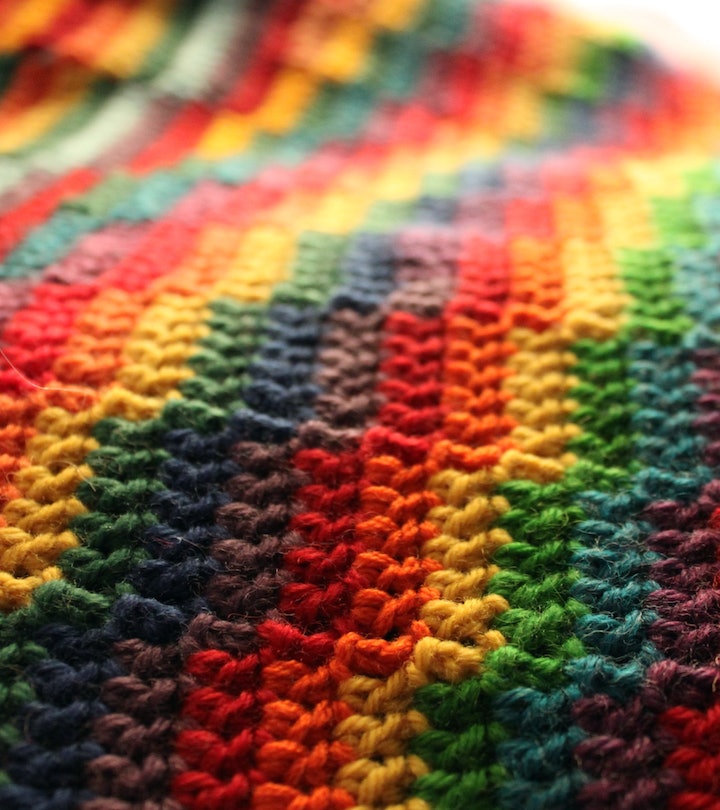 She was accused of being "disrespectful" because she hadn't had a miscarriage.

In a viral post on the popular sub-Reddit forum "Am I The A**hole," one mom shared that she made rainbow blanket for her baby, but it stirred up a bit of controversy with her friend. The mom was confused by the whole encounter, as was pretty much everyone else who commented on the post.

So here's the issue as laid out by Reddit user u/linzer10; she is expecting her second child, a baby girl, and she is in the process of crocheting her daughter a blanket with yarn chosen by her 3-year-old son. "I decided to let him pick out a color yarn for one of the blankets, and he picked a literal rainbow colored, vibrant, variegated yarn," she wrote on Reddit, adding that her son "loves to see it and mentions the 'rainbow for baby sister' every time he does."

According to the mom, one of her friends was interested in purchasing one of her blankets, but when the pregnant mom sent a photo of the blanket she was creating for her own baby, the friend took offense. Why? Because she hadn't had a miscarriage, apparently. "I told her it was for my baby and she asked whether I’d had a secret miscarriage before this baby. When I told her no, she went off on me saying it was very disrespectful to make myself a rainbow blanket when I hadn’t suffered a miscarriage and therefore I wasn’t having a rainbow baby," the mom shared on Reddit.

The term "rainbow baby" has come to signify a baby born after a pregnancy loss, stillbirth, or neonatal death, as Healthline explains. The meaning of the term is all about the beauty in the bright colors of a rainbow after the storm of loss. While the significance of a rainbow baby "hadn't even crossed" the Reddit user's mind when she was making the blanket, she admitted she "can see where someone may think this baby is a rainbow baby if we use the blanket in public."

A woman came under fire for making a rainbow blanket for her baby.

Reddit users were confused by the friend's vehemence, with one person writing that rainbows are not the providence of miscarriages. "Okay I’m actually being serious here. Since when was it decided that rainbows were only for miscarriages now?" one reader commented, while another person noted, "My first thought was baby for an LGBT couple," as the rainbow flag has long been a symbol of the LGBTQ+ rights movement.

Finally, one parent wrote, "Speaking as someone currently pregnant with a rainbow baby.... NTA [not the a**hole]. Rainbows aren’t reserved for those of us that have suffered miscarriages. Your friend is an AH, more so if she herself hasn’t had a miscarriage because then she has no right to comment. You finish your blanket and congratulations on your pregnancy!"

The general consensus on social media appears to be that this woman is welcome to make any kind of blanket she likes for her baby without fear of repercussions. Particularly since the blanket had special meaning for her son.