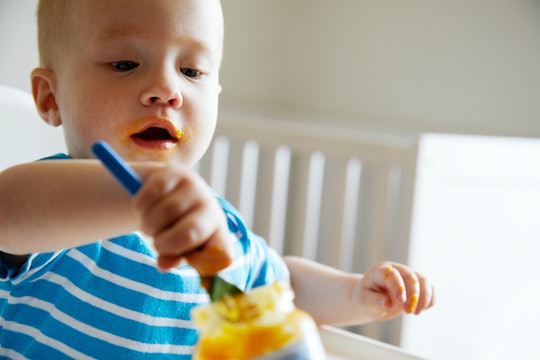 A mom leading the suit said she fed her 1-year-old son products from the five major brands almost exclusively because she thought were safe.

Reports alleging products from a number of baby food brands contained potentially dangerous levels of toxic heavy metals have spurred the mother of a 1-year-old child to file a class-action lawsuit against five major baby food manufacturers. In her suit, Staten Island mom Michelle Walls claims she fed her son products from the five companies almost exclusively because she believed they were safe but has since noticed her son failing to hit "developmental benchmarks."

"For years, these baby food companies have known that their products contained high levels of toxic heavy metals," Walls' attorney, Christopher Leung, said in a recent press release. "That's unacceptable, and we intend to hold these companies accountable."

Gerber, Beech-Nut, Earth's Best Organic, Happy Family Organics, and Plum Organics have all been named as defendants in Walls' suit, which was filed earlier this month in the Federal District Court for the Eastern District of New York, according to Leung.

Walls' suit stems from a Feb. 4 report released by the House of Representatives' Subcommittee on Economic and Consumer Policy, which found "significant levels of toxic heavy metals, including arsenic, lead, cadmium, and mercury" in a number of baby food products. Specifically, the report noted arsenic, lead, and cadmium had been found in products made by all four of the companies that voluntarily cooperated with the Subcommittee's investigation —Nurture, Inc., Beech-Nut Nutrition Company, Hain Celestial Group, Inc., and Gerber. Test results and company documents requested by the Subcommittee only revealed mercury in products from Nurture as Gerber rarely tested for it and Beech-Nut and Hain had never conducted tests for mercury.

According to court documents obtained by The Staten Island Advance, Walls had been almost exclusively feeding her son products from Gerber, Beech-Nut, Earth's Best Organic, Happy Family Organics, and Plum Organics from July 2020 to February 2021 as she "believed that Defendants' baby foods were safe." It was only when Walls learned of the Subcommittee's February report that she immediately stopped feeding him products from the companies named in the suit.

In her complaint, Walls noted her son "was not hitting certain 'developmental benchmarks,' including but not limited to: walking, imitating others, verbalization, and pointing," The Staten Island Advance reported. Walls has since ordered a test, which will detect the levels of toxic heavy metals that may be in her child's bloodstream, the paper has reported.

While it remains unclear why Walls' 1-year-old may be missing certain "developmental benchmarks," the Federal Food and Drug Administration (FDA) has previously warned that toxic metals like arsenic, lead, and mercury can "lead to illness, impairment, and in high doses, death."

"Combining all of the foods we eat, even low levels of harmful metals from individual food sources, can sometimes add up to a level of concern," the FDA has said. The agency does not, however, currently regulate levels of toxic heavy metals in baby foods. Following their February report, Congress called on the FDA to establish thresholds for allowable levels in an effort to better protect babies.

A spokesperson for Nuture, Inc., which owns Happy Family Organic, tells Romper the company stands by the "quality and safety of all of its products and is proud to have best-in-class testing protocols in our industry." While the company doesn't comment on pending litigation, Nuture's spokesperson says the company intends to "vigorously defend this case.”

Campbell's, which owns Plum Organics, gave Romper a similar statement. "Campbell is confident in the safety and quality of our product," a spokesperson tells Romper. "The company does not comment on pending litigation, but we do intend to defend this case vigorously."

Although neither Beech-Nut Nutrition nor Hain, which owns Earth's Best Organic, would comment on the lawsuit, both stressed safety was one of their top priorities. Gerber did not immediately respond to Romper's request for comment.