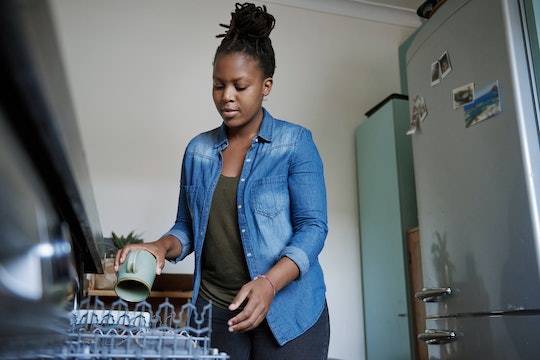 Gender stereotypes are alive and well.

Moms really can’t seem to catch a break. A new study has found that moms actually take on more housework when they earn more than their husbands because of a kind of “traditionalizing” effect. So just when moms are finally beginning to earn more money, now they’re also on the hook for more work around the house. Will wonders never cease.

The study published in the journal Work, Employment and Society looked at how gendered housework and spousal income affects the division of parental labor. It was a wide-ranging study that took place over 18 years, from 1999 to 2017, looking at a total of 6,643 dual-earner heterosexual couples. Lead author Joanna Syrda, a professor at the U.K.-based University of Bath School of Management, focused specifically on how parenting might affect household roles when culling through information gathered by the Institute of Family Studies. And what Syrda found was surprising.

It seems that the more the gender pay gap closed, the wider the gender housework gap opens. While the childless couples in the study did not experience any shift in their division of housework regardless of how much each spouse made, the same did not hold true for moms and dads. The more money the moms earned, the more housework they were doing. Syrda noted that she found a “traditionalizing effect” seemed to be experienced only by married parents and not by parents who were cohabiting.

“While parenthood could theoretically incentivize a more efficient division of labour, I find it has a traditionalizing effect and parents’ housework exhibits significant gender deviance neutralization while housework division of childless couples is independent of relative income,” Syrda wrote.

“We see these top female earners as compensating in doing more housework,” Syrda told The Washington Post, “not when women out-earn their husbands but when mothers out-earn fathers. So parenthood seems to have that traditionalizing effect.”

When the traditional household roles are challenged when moms earn more than their husbands, there’s a subconscious attempt made to return to those roles as parents, economist Misty L. Heggeness explained to The Washington Post: “Not only are societal gender norms stronger around parenthood, biologically women end up spending disproportionate time with young kids due to birth, breastfeeding and the bond that develops out of those activities.”

Keep in mind, this study ended in 2017. Three years before Covid-19 hit and changed the game for working moms yet again. The Center for Global Development found that moms took on an average of 173 extra childcare hours in 2020, all while trying to hold on to their jobs and protect their families from a pandemic. Oh, and if they happened to be able to earn more than their husbands, which seems nearly impossible since so many moms found themselves unemployed or underemployed during the pandemic, they would also be kicking in with extra housework.

Remember this information this Mother’s Day, please. That is all.