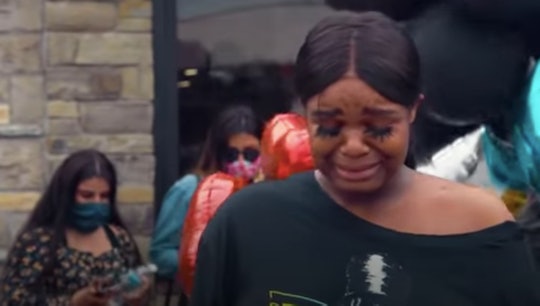 “Her bravery in that moment must never be forgotten.”

Derek Chauvin has been found guilty on all charges in the murder of George Floyd, the 46-year-old Black man the nation watched struggle to breathe as the former Minneapolis police officer kneeled on his neck for over 9 minutes. Floyd’s arrest and the final moments of his life were captured on video by Darnella Frazier, a bystander who was just 17 years old at the time and is now being applauded for her bravery on that painful day.

Frazier, now 18, recorded Floyd’s death on her cellphone on May 25, 2020 as she was taking her 9-year-old cousin to a local convenience store to get a snack. She later became a star witness in Chauvin’s trial where a jury ultimately found him guilty of two murder counts and one manslaughter count. During her tearful testimony, Frazier said what happened to Floyd makes her think of her own family. “When I look at George Floyd, I look at my dad, I look at my brothers, I look at my cousins, my uncles," she said. “That could've been one of them."

“It's been nights I stayed up apologizing and apologizing to George Floyd for not doing more and not physically interacting and not saving his life,” Frazier added. “But it’s like, it’s not what I should have done, it’s what [Chauvin] should have done.”

While those thoughts have kept Frazier up at night, Twitter is crediting the teenager’s bravery that day for being able to help bring justice to Floyd’s family. Mothers, in particular.

Actress and mother of two Kerry Washington called Frazier a “hero.” “Darnella Frazier is a hero,” Washington tweeted. “Her bravery in that moment must never be forgotten. We lift you up Darnella.”

Journalist Michele Norris, who describes herself as a “MamaBear” on Twitter, wrote, “Can we all sing a praise song for Darnella Frazier who had the presence of mind to film that video that made such a difference in this case and now must live with the memories that will walk alongside her for the rest of her years.”

“History should remember the incredibly 17 year old Darnella Frazier who had the strength and composure to capture the murder of #georgefloyd on video. Without her video there may never have been #justice,” Valerie Jarrett, a senior advisor to President Barack Obama and mother of one, tweeted.

Journalist and mother Ann Marie Lipinski called Frazier’s video “one of the most important civil rights documents in a generation.”

Mother of four and vice president of the Rhode Island Foundation Angela B. Ankoma applauded Fraizer’s “courage.” She tweeted, “I am thinking about Darnella Frazier, a 17 year old girl, who had the courage to film something that was wrong. Thank you to ALL the bystanders who bore witness to the tragedy. This didn’t happen without you. Blessed are those who [are] keepers of justice.”

While Frazier is celebrating the verdict, many have pointed out that she has undoubtedly suffered immense trauma since May 25, 2020. To help her find “peace and healing,” a GoFundMe has been started to help raise fund to support the “restoration of hope for Darnella Frazier — whatever that means to her.” Since it was created last year, it’s raised over $564,000.

More Like This
Can States Ban The Abortion Pill? FDA Rules May Make That Hard
Ketanji Brown Jackson Spoke Directly To Her Daughters In Her Powerful Opening Statement
Robb Elementary School Is Set To Be Demolished After Deadly Shooting
Here’s How To Fight For Abortion Rights