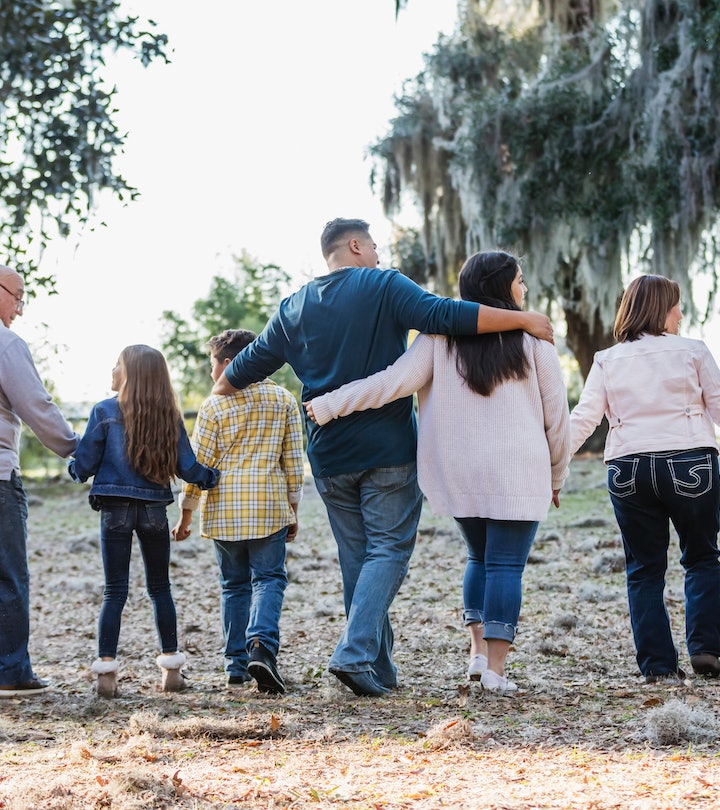 Can’t we all just get along?

When you say, “I do”, you not only get a new partner to spend your life with, but a whole new set of parents, too. And while you hopefully have a great relationship with your in-laws, they might not be as welcoming to your parents, whom they may feel uncomfortable around or even resentful towards. If you’re finding that the green-eyed monster is rearing its ugly head every time there’s an interaction between your parents and your partner’s, you’ll need to learn how to handle in-laws who are jealous of your parents — because it does happen.

Although it might seem inexplicable to you that your in-laws aren’t getting along with your parents, it can happen, and when it does, it can hurt the dynamic of the entire family. “Having in-laws who are jealous of your own parents is more common than you might expect,” relationship coach Krishna Avalon tells Romper. Ignoring the awkwardness or insults isn’t going to make the situation any better, but it’s kind of an understandable approach, according to Kiaundra Jackson, a licensed marriage and family therapist. “Most people are much closer with their parents than someone who just recently came into their life,” she explains. “So it makes sense that in-laws may be jealous of one’s parents because they are entering into a new family where they are unfamiliar.”

What are signs that your in-laws are jealous of your parents?

If you suspect that have a jealous father or mother-in-law, it’s possibly you have that sense for good reason — there are many ways that envy can enter the relationship. “The most common sign is when they complain that you are seeing your parents more than them,” Dr. Lee Phillips, a psychotherapist and certified couples therapist explains to Romper. “Another jealous sign is when they become nosey, and they start asking question after question about your parents.”

Other signs that your in-laws might be jealous of your parents is if they force you to choose sides in a disagreement, or even overstep their boundaries, Jackson adds. “They might invade your privacy, or they fight over time with the grandchildren and they are intentionally or unintentionally comparing and contrasting everything,” she says.

But one of the biggest signs that your in-laws are jealous of your parents has nothing to do with their behavior — and everything to do with yours. “Notice if you are trying to dim or minimize your relationship with your own parents to make your in-laws comfortable,” warns Avalon. “This never helps anyone.”

How do you fix the relationship between your in-laws and your parents?

Ideally, your in-laws would iron out their issues with your parents all on their own. But that’s not necessarily a realistic hope. How you might be able to play peacemaker — or if you even need to — largely depends on how bad their behavior actually is. “The best way to handle this situation is to talk to both sets of parents separately and then maybe together,” suggests Jackson. “It’s important to get a good sense of where the tension resides, when it started, why it is present, and what can be done to resolve the issue.”

Once you believe you’ve pinpointed the problem — or at least made your in-laws aware of their behavior — take some steps to ensure they feel included. “Create different events or occasions that are special to each set of parents,” says Avalon. “For example, Sunday night dinners can be with the in-laws, and then have a weekly brunch with your own parents,”

Above all, try to be empathetic to your in-laws’ emotions. After all, if they’re feeling jealous, it’s probably because they perceive that they’re not as special as your own parents. “It is helpful to validate the in-laws who may be jealous depending on the relationship you have with them,” adds Phillips. “Trying to understand their feelings can be helpful.” If, despite your and your partner’s best efforts, your in-laws continue to feel insecure, family therapy might help everyone establish clear communication and healthy boundaries.

Dealing with in-laws who are jealous of your own parents might not seem like a big deal but it can poison all the parts of your family dynamic, from your relationship with them to your partner, too. Speaking openly about everyone’s emotions and helping your in-laws understand that they play a pivotal part in your newly formed family might make them realize how special they really are.

More Like This
39 Halloween Trivia Questions & Answers
How Do I Date As A Widow Without Guilt?
11 Halloween Wreath Ideas To Welcome Spooky Season
These 15 Air Purifiers Are Some Of The Best For Your Home