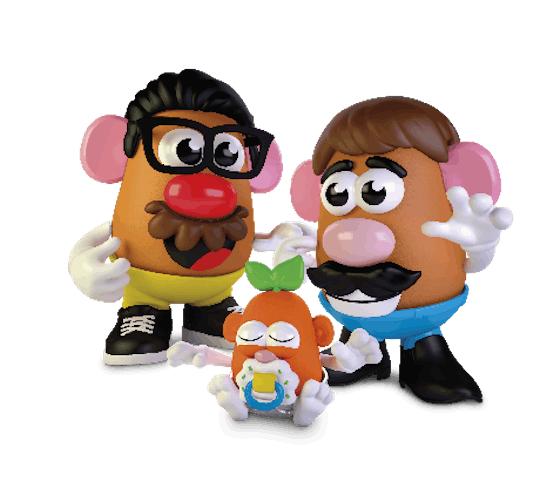 The classic toy, originally invented in 1949 by George Lerner, but perhaps best known from their hilarious cameos in the Toy Story movies, has undergone a rebranding for the 21st century. After 72 years of a stiff formality, Mr. Potato Head now has a new gender neutral name. Realistically speaking, though, kids have essentially been making the plastic toy potato with the interchangeable limbs gender neutral themselves over the past seven decades.

If you've ever seen a kid play with a Potato Head, there are no rules. They don't appear to follow any weird gender normative standards. I mean, they're putting the arms in the leg holes and vice versa because it's their Potato Head. So essentially, Hasbro has simply marketed Potato Head to what kids were doing all along.

"Looking ahead to 2021, Hasbro is making sure all feel welcome in the Potato Head world by officially dropping the 'Mr.' from the Mr. Potato Head brand name," Hasbro said in a statement on Thursday.

Despite the fact that kids — the toy's target market, of course — have never seemed all that invested in the gender of Mr. Potato Head, the change in branding has brought on some strong reactions. Like one Twitter user who wrote, "Good Morning everyone except those who wanted to change Mr Potato Head's name to just Potato Head."

Potato Head is no longer a mister.

Now, gender is not really the issue people should be concerned about with Potato Head, as one person commented on the news. "If you're gonna get upset about Mr. Potato Head, maybe focus on the fact that it teaches kids to rip his legs off and jam them in his arm holes," Twitter user @TVietor08 wrote. "Seems like a problematic lesson."

Piers Morgan jumped into the fray with his opinion about Potato Head. "Imagine thinking in the middle of a global pandemic: 'What's really important is dropping the 'Mr' from Mr Potato Head & making him gender-neutral in case we upset a few wokies.'"

But as editor Molly Jong-Fast pointed out, "If you’re upset about mr potato head, you’re not a serious person."

One person offered an explanation of the rebranding to help people struggling with the news. "people aren't understanding the potato head rebrand," @MagicTownTown tweeted. "all it means is that it's gonna be gender neutral when you initially buy the toy. once you start decorating, kids can assign whatever gender they want, or let it stay gender neutral. what's the problem?"

Adults can argue about Potato Head all day long, but ultimately kids don't care. They're going to play with their Potato Head the way they've always done — oblivious to our concerns. Enjoying their time with a plastic spud who never had a gender in the first place.

Since the initial news was announced, Hasbro has clarified the rebranding changes, sharing that Mr. and Mrs. Potato Head toys aren't disappearing from stores — the brand and the logo would be dropping the "Mr." title. "Hold that Tot – your main spud, MR. POTATO HEAD isn’t going anywhere!" the company wrote on Twitter. "While it was announced today that the POTATO HEAD brand name & logo are dropping the ‘MR.’ I yam proud to confirm that MR. & MRS. POTATO HEAD aren’t going anywhere and will remain MR. & MRS. POTATO HEAD."

So everyone can calm down.