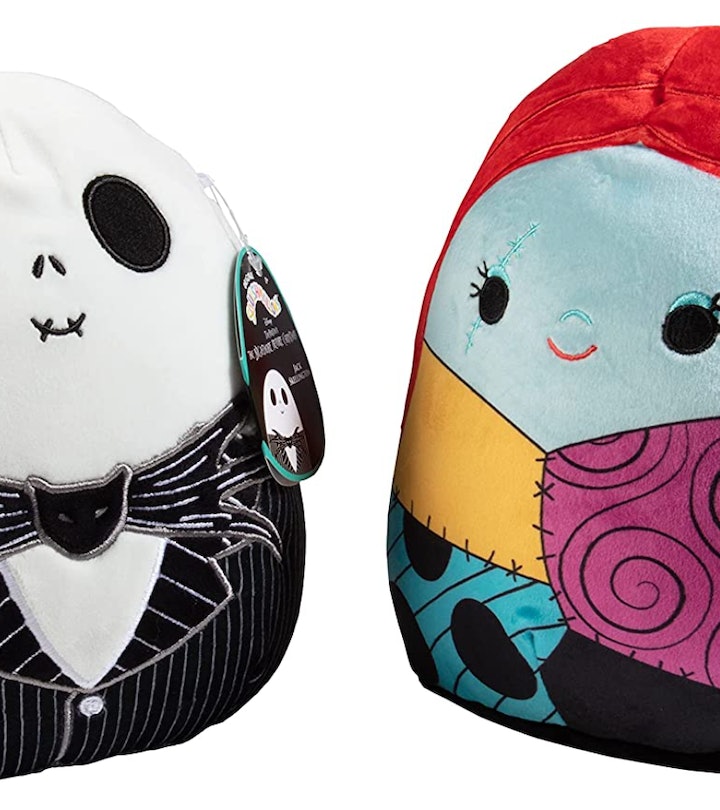 These ‘Nightmare Before Christmas’ Squishmallows *Are* Halloween

Squish this Halloween. (Yes, your kids will make a scene.)

If there’s one thing I know about Squishmallows, it is that you have to either be extremely quick or extremely lucky to get your hands on the most popular characters — especially the big ones, and even more so around the holidays. Despite this knowledge, I’m currently on the hunt for all of The Nightmare Before Christmas Squishmallows mere days before Halloween. Because y’all, they’re just that cute. Seriously.

Are they hard to find? Yes. Do my kids want them anyway? Absolutely. Am I also slightly obsessed with the concept of an ultra-huggable version of Zero? Honestly, yes.

Since their inception in 2017, Squishmallows have taken off in a viral way. They’re wildly popular, and though they can be purchased at places like Target, Walmart, Kroger, CVS, and Aldi, stock is usually limited. Like hunting popular Beanie Babies in the ‘90s, the process of finding the Squishmallow of the moment can be super hit or miss. (Please don’t ask me about our Baby Yoda quest. The memories are still too fresh.)

If anyone in your household loves the classic Tim Burton film, you’re probably well acquainted with all of the characters by now and may even have some Halloween decorations or Christmas ornaments that feature Jack, Sally, Oogie Boogie, and Zero. But having their favorite characters in Squishmallow form is the epitome of super fandom for little kids. Instead of singing “This is Halloween,” your kids might as well change the lyrics to “Squish this Halloween” because they’re absolutely going to make a scene until you find them all.

What’s this? What’s this? Just the most squishable version of The Nightmare Before Christmas’ burlap-clad boogeyman. Dare I say, some may even call this villain huggable.

There are two colors of Oogie Boogie Squishmallows — green and beige — but both appear to be largely hard to come by. Walmart is out of stock, but previously had the 12-inch beige Oogie Boogie listed on their website for $75. Individual sellers on sites like Ebay and Mercari currently have the green Oogie Boogie in various sizes available, but pricing varies by seller.

Kroger has the 5-inch version of Oogie Boogie in both colors on their website, though marked as unavailable for shipping, delivery, or pickup. If Oogie is your guy, it may be worth checking out your local store’s end caps. (For what it’s worth, the 5-inch Sally, Jack, and Zero Squishmallows all appear on Kroger’s site this way as well.)

Is there a more iconic Halloween duo than Jack and Sally? Though round and plush, the Squishmallow versions get all of the important details right. Jack’s stitched-on grin and his bat-shaped bowtie are on point, while Sally’s red rag doll hair and her patchwork dress are sheer perfection.

Sold individually in some stores and as a set by select online retailers, fans of The Pumpkin King will fall hard for the hero and heroine in Squishmallow form. Pricing and sizing varies by retailer.

If you’re looking for the perfect movie-watching companion this Halloween, look no further than this adorable Zero Squishmallow. From his floppy ears to that festive pumpkin-shaped nose, Zero is just the cutest ghost pup around.

Cuteness, though, can be costly. The 8-inch Zero Squishmallow is currently listed on Amazon for just under $73. At present, Zero is listed as out of stock at Target, but was previously priced at $24.99. Like his creepy counterparts, your best bet for buying a Zero is probably to scour local store shelves.