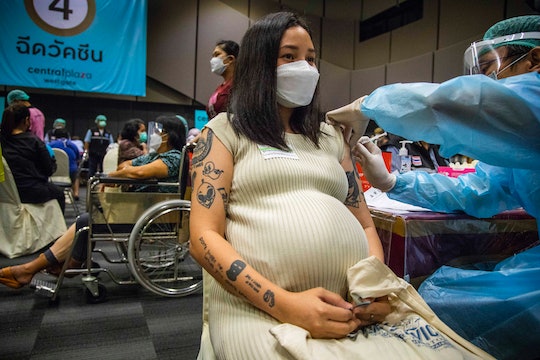 The best time for pregnant people to get vaccinated against Covid-19? Right now.

A new study from researchers at Weill Cornell Medicine and New York-Presbyterian suggests that the best time for pregnant people to get vaccinated against Covid-19 is as soon as possible. Researchers examined the levels of antibodies to SARS-CoV-2, the virus that causes Covid-19, present at the time of birth and found levels did not dramatically differ based on vaccination timing. As a result, researchers have concluded there is no benefit for a pregnant person to delay getting a Covid-19 vaccine until later in their pregnancy.

In an effort to determine maternal and umbilical cord blood anti-spike immunoglobulin (IgG) levels at the time of delivery in vaccinated pregnant people, researchers examined blood and umbilical cord samples from 1,359 pregnant patients. All participants were vaccinated against Covid-19 with either the Pfizer-BioNTech, Moderna, or Johnson & Johnson/Janssen vaccines and 20 participants had received an additional booster dose of a vaccine.

“Maternal anti-spike IgG levels were detectable at delivery regardless of timing of vaccination throughout pregnancy among fully vaccinated women,” researchers concluded in their study, which was published Tuesday in Obstetrics & Gynecology.

While antibody levels did differ to some degree, with those who received a vaccine or booster early in the third trimester of pregnancy having the highest levels, the results weren’t dramatic enough for researchers to conclude there was a benefit to delaying vaccination. “Although the highest maternal, and consequently umbilical cord blood, antibody levels occur with early third-trimester vaccination, our data should not be interpreted to suggest that women should defer vaccination until the third trimester,” researchers wrote in their report. “Rather, our data support the importance of early completion of a full vaccination series.”

Vaccination rates among pregnant people, however, remain low in the United States despite the Omicron variant driving a surge of new Covid-19 cases. Recent data from the U.S. Centers for Disease Control and Prevention (CDC) has shown roughly 22% of pregnant people have received a Covid-19 vaccine while another 18% of pregnant people were vaccinated prior to their pregnancy. The CDC has strongly urged all pregnant and breastfeeding individuals to get vaccinated against Covid-19 as the virus puts pregnant people at an increased risk of severe illness, preeclampsia, premature birth, and even death.

Researchers at Weill Cornell Medicine and New York-Presbyterian have argued that pregnant people cannot predict when they will deliver and that maternal protection from Covid-19 throughout pregnancy is best for both mother and child as it minimizes the risk of severe illness. What’s more, researchers found that newborns born to fully vaccinated people had similar or higher umbilical cord anti-spike IgG levels than those born to people who had initiated vaccination in the third trimester but were not fully vaccinated ahead of their delivery.

Additionally, getting vaccinated early in pregnancy would allow an individual to receive a booster shot later in their pregnancy, something researchers have said could offer even greater protection. According to researchers, the study found a booster shot administered in the third trimester was associated with maternal anti-spike IgG levels that were higher than those seen in participants who waited to become fully vaccinated in the third trimester.

“Thus, the risks of waiting until the third trimester to initiate vaccination in the hopes of optimizing neonatal antibody level at delivery do not benefit either the pregnant woman or the fetus,” researchers concluded.