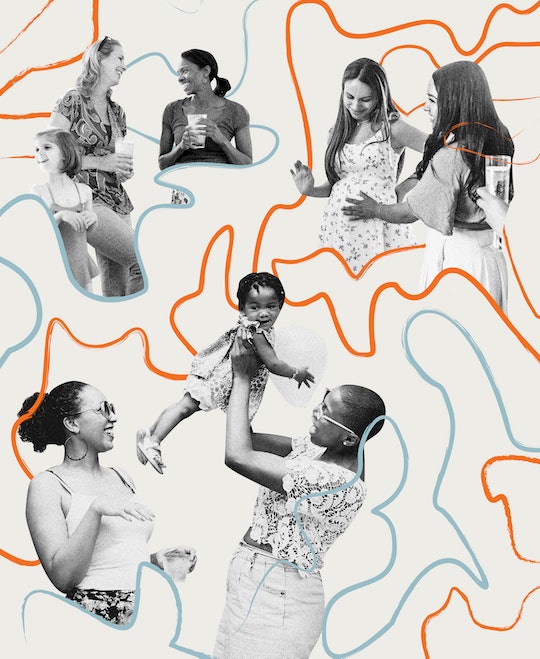 An Ode To The Mom Friends Who Aren’t Moms

I know I wouldn’t be the mom I am today without my friendship with Dani and Lisa, neither of whom ended up having kids themselves.

Dani tells this story better than me. We like to bring it out now and then, usually on a special occasion like my daughter’s recent 18th birthday dinner. It’s just a small tale, a little pearl we polish with retelling. It glows now, a tiny, luminous gem on a long chain of memories.

Summer, 2002: I’m “down the shore” with my new-ish boyfriend for the long 4th of July weekend. We're there with his old friend from middle school, and his girlfriend, Dani. She immediately makes me feel at ease in this group of strangers who are all, like my boyfriend, in their early 30s to my 26, a little intimidating in theory, with their careers and cars and roommate-less apartments. Normally, this weekend would be right up my alley — a new bikini, a crowded house, afternoons on the beach, nights drinking beer and dancing at the local spot the gang has been frequenting since college. But for some reason, I just can’t fully get into it. My energy flags. I don’t feel like dancing, I don’t feel like drinking. Even the romantic prospect of midnight stroll on the beach under the glorious night sky seems too tiring.

“I don’t know what’s wrong with me,” I confess to Dani halfway through the weekend, sinking deeper into a towel, feeling like I could fall asleep right there and let the hot sand soak into my bones through to the next morning.

And then, my now famous words: “I just don’t feel like myself.”

Usually at this point in the story we’ll chime in together, and then we will laugh and gesture to "our" Isabella, my daughter who, unbeknownst to anyone, was there that weekend too, my pregnancy the real reason for my mysterious lethargy.

When I gave birth the following March, I became the lone parent among my own friends, most of whom were still back in Northern California or scattered around the world on post-college adventures. I felt impossibly alienated from the friends I’d made since moving to New York City the year before, all fellow waiter-temps/aspiring actors who were still sleeping in after late nights at Don’t Tell Mama while I paused my morning commute to barf into garbage cans on subway platforms. But I also felt like I had nothing in common with the few 30something moms among my boyfriend’s friends, with their suburban Jersey yards and Target obsessions. (Yes, I too, was rather suddenly a suburban Jersey mom, but not like them.)

I worked diligently at making new mom friends, toting my delicious, amiable newborn around to La Leche meetings and baby yoga classes, calling the Italian woman I’d met in childbirth preparation class so she could then stand me up for our soup date.

All the while, slowly over the years of get-togethers, Dani and I, along with another “girlfriend” in the group, Lisa, grew into our own friendship, on our own terms. And while I now have plenty of friends who are moms to commiserate with, as I look back over my 18 Mother’s Days, I know that I wouldn’t be the mom I am today without my friendship with Dani and Lisa, neither of whom, as it so happens, ended up having kids themselves.

It’s not just that they’ve taken on the roles of beloved aunties to Isabella — bringing bouquets to countless ballet recitals and play productions, showing up at every birthday party, marking every special occasion, always welcoming Isabella to any gathering, where she was often the only baby and then the only kid at a city restaurant table full of grown-ups — though of course that in itself is an immeasurable gift.

You don’t have to have children to understand them, to remember what it was like to be a child, to have insight and perspective and great parenting advice.

And it’s not just their friendship, the endless text threads, the losses we have weathered together, the many glasses of wine, the abruptly canceled spa day last March for Dani’s birthday we’re looking forward to re-planning. It’s their support and advice that I’ve depended on, that I depend on, as a mom. You don’t have to have children to understand them, to remember what it was like to be a child, to have insight and perspective and great parenting advice.

Isabella was 8 when my sister died suddenly and horribly, and I spent a couple of years in a shocked, grief-stricken fog. I functioned, but I was not well. After one trip home to California to visit my mom sometime toward the end of that period, Isabella and I arrived back at our house late one night to find that Dani had orchestrated a massive makeover of my home office, where I spent my work days as a fully remote editor. Gone were the piles of papers and stacks of boxes and beauty products and PR mailers, gone was the chaos. In its place were new bookshelves, new curtains, a beautifully empty new desk table. One wall now held a cluster of chic metal bulletin boards dotted with colorful magnetic “tacks,” waiting to hold my photos and prints.

“I felt like you needed something,” Dani said to me when we next saw each other. “You haven’t been yourself — even with Buggy.” She gently mentioned she’d noticed how uncharacteristically sharp I’d been with Isabella recently. Understandable, of course, but still, I knew I was not quite the mom I wanted to be, or that she deserved. And this kind reflection helped me step out of myself for a moment, and remember who I was, who I wanted to — and could still — be.

My office that night appeared to my astonished brain like an oasis, and it became one: a place where I could work, and concentrate, and take inspiration from the order around me as I navigated my way through trauma into a place with a little more peace, a little more clarity.

But there’s something to be said for the friends who aren’t experiencing exactly what you’re experiencing, yet who meet you there anyway, with wisdom, and with love.

There’s something to be said for the “mom friends” who are going through (or have gone through, or are about to go through) what you’re going through. The friends I can text about a ridiculous new policy at our kids’ school, the one I bonded with over our shared hatred of an evil ballet teacher, the friend who helped me breathe through the college application process that she’d already survived. But there’s something to be said for the friends who aren’t experiencing exactly what you’re experiencing, yet who meet you there anyway, with wisdom, and with love.

Impossibly, a decade has passed since that night I came home to my oasis. For her 18th birthday last month, after consulting with me over a flurry of texts, Lisa gave Isabella a beautiful, cozy comforter for her soon-to-be dorm room; Dani gave her a chic black quilted travel bag set. This weekend, Dani will be at the shore, but Lisa will represent the aunties in a beach chair as we watch Isabella’s final high school performance at an outdoor theater.

Next month, they will both celebrate her graduation, and then this fall, I know they’ll be there for me as I figure out, once again, how to be myself — to remember who I was, who I wanted to, and could still be, this time in an empty nest.