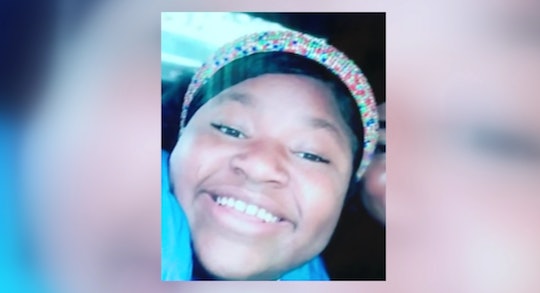 The killing happened minutes before a Minneapolis police officer was found guilty of murder in the 2020 killing of George Floyd.

A 16-year-old Black girl was shot and killed outside her home by a police officer in Columbus, Ohio, on Tuesday. Members of the teen’s family have identified her as Ma’Khia Bryant and said it was Bryant who called police seeking help after a group of people threatened to assault her. The killing occurred minutes before a jury in Minnesota found former Minneapolis police officer Derek Chauvin guilty of murder in the 2020 killing of George Floyd.

At a press conference held late Tuesday, Interim Chief of Police for the City of Columbus Michael Woods said officers had been dispatched to the 3100 block of Legion Lane just after 4:30 p.m. earlier that day following a call in which the caller reported, “females were there trying to stab them and put their hands on them.” Woods did not provide information on the caller’s identity, although Bryant’s mother told WBNS it was her daughter who had called police seeking help.

“My daughter dispatched Columbus Police for protection, not to be a homicide,” Paula Bryant said in an interview with WBNS. “This never should have happened.”

Edited body cam footage released by police showed the first officer to arrive on the scene fired four shots at Bryant seconds after exiting their vehicle and observing her push one person to the ground and charge at a second. In the video, a knife can be seen falling to the ground next to Bryant immediately after she is shot. Readers should be aware the body cam footage contains disturbing graphic and violent images.

Immediately after the shooting, a man can be heard shouting at the officer, “You didn’t have to shoot her, she’s just a kid, man!”

“She had a knife. She just went at her,” the officer responded.

Woods told reporters that other responding officers summoned a medic and began CPR on Bryant, per department policy. According to the Associated Press, Bryant was pronounced dead at a nearby hospital.

“This is a tragic incident for all involved, but especially for the family of the female,” Woods said.

According to Woods, Ohio’s Bureau of Criminal Investigation has launched an investigation into the shooting. Upon its conclusion, the Columbus Division of Police will begin an administrative review of the responding officers’ actions.

Speaking alongside Woods at Tuesday’s press conference, Columbus Mayor Andrew Ginther said the responding officer “took action to protect another young girl in our community.” He acknowledged, however, that “a family is grieving tonight” and said he was praying for Bryant’s family.

Franklin County Children Services has confirmed Bryant was a foster child under their care at the time of her death. “This was a tragic incident and FCCS is continuing its involvement with the family throughout this difficult time,” the agency said in a statement released to the media.

In comments to WBNS, Paula remembered her daughter as “a loving girl,” noting the teen had recently made the honor roll at her school. “Ma’Khia had a motherly nature about her,” Paula said. “She promoted peace and that’s something that I want to always be remembered.”