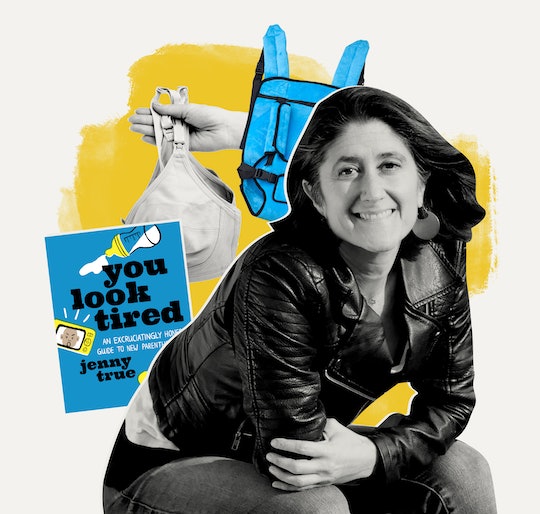 Postpartum Fashion, An Oxymoron If Ever There Was One

We are indoctrinated to be ashamed of the changes in our body, so we cover them up, perpetuating the myth that pregnancy and childbirth are temporary situations.

I know what I wore to the hospital: white maternity sweatpants. Apparently I also brought another pair of pants, because I remember having to throw the sweatpants into a garbage can in the hospital after I bled through them in the recovery room. Still, I have no idea what I wore on the ride home, although I remember every second of it, hunched over someone who weighed seven pounds and screaming at every car that got too close.

Knowing me, my coming-home outfit was something practical and not attractive, and I don't mean you'll find a picture of me on Instagram looking charmingly disheveled. The only thing I remember liking about my appearance after my son was born were my calves, since I had decided to make calf raises part of my pre-baby fitness routine and the extra forty pounds helped.

The problem with postpartum fashion is that you go directly from a body the world has grudgingly agreed to clothe to a body the world is hoping will go away. Eighty-seven thousand percent of advice for new parents is how to "get back in shape" (assuming, hilariously, we were "in shape" to begin with) so the world doesn't have to hurt itself diving away from us on the sidewalk.

Another phrase we hear a lot in the postpartum phase is "get your body back," which is code for "lose weight." The problem is IT ASSUMES GETTING OUR BODIES BACK IS POSSIBLE.

Here's something a lot of people don't understand: Even the thinnest people who give birth can have abdominal separation, stretch marks, and loose belly skin — all permanent! It's really common! But we are indoctrinated to be ashamed of these changes rather than proud of them, so we cover them up, perpetuating the myth that pregnancy and childbirth are temporary situations, rather than physically life-altering events with permanent physical changes. I can no longer sit cross-legged on a hard surface, because my coccyx is not in the same place it was pre-birth. Also, I have some before-and-after pictures of my boobs if anyone's interested.

And since no one will tell you: If you nurse, having the baby does not suddenly make your old wardrobe available to you. Any camisole, tank top, T-shirt, short-sleeved shirt, long-sleeved shirt, sweater, sweatshirt, and dress — ESPECIALLY DRESSES, GOD DRESSES ARE THE WORST — that does not offer immediate access to your naked breasts in the form of snaps, a zipper, a V-neck, or buttons (and you're not going to want to button and unbutton twelve times a day, so even buttons are out) are still not available to you. This may seem obvious to people who've been through childbirth, but NEW PARENTS NEED SOMEONE TO CONNECT THE DOTS, HELLO.

When I got home from the hospital, mostly I wore the nightshirt they gave me there, because the front had snaps from the neck to the belly. Also I wore leggings, a lot of tank tops, and my bathrobe.

However, SJ insisted on buying a wrap carrier, and this is important. The wrap carrier was 73 feet of cloth, and you needed to watch an instructional video to learn how to use it. Once you were wrapped in it with your baby against your chest, you were essentially wearing a shirt (and a baby). Five weeks after my son was born, we took a trip to Sequim, Washington, to visit my mother-in-law and stepfather-in-law. We got up in the dark in San Francisco for the drive to the airport, and the memory of what packing used to be like is enough to tip me into a deep, defensive, narcoleptic sleep: car seat base, car seat, stroller, diapers, wipes, baby shampoo, baby washcloth, a massive duffel bag with toys, books, blankets, and three pairs of everything, airplane entertainment bag, food bag in case anyone got hungry and thought for a second they were going to buy some overpriced shit from the airplane cart, and purse.

You know when you go all day wondering why everyone is smiling at you, and you finally just decide it's because the world is a beautiful place and everyone has finally realized what a great person you are?

I recently found a picture of this trip from August 31, 2017, meaning my son was thirty-seven days old. I am sitting in an airplane seat, wrapped in the carrier, with one side down to nurse my son. I am sure I demanded SJ take this picture of me. I am smiling, proud to be traveling with my son for the first time at five weeks, and proud of myself for nursing in public.

IT IS OBVIOUS I AM NOT WEARING A SHIRT. I am naked from my neck to my nipple, including one shoulder and my chest.

You know when you go all day wondering why everyone is smiling at you, and you finally just decide it's because the world is a beautiful place and everyone has finally realized what a great person you are?

Hours later, on the ferry from Seattle to Bainbridge Island, I took myself for a walk to the bathroom, my son still strapped to me. I accepted all the warm smiles on the way, imagining how strong and capable I looked. Outside the windows, Puget Sound glistened in the sun, and these things called trees appeared on every shore (San Francisco has a few bushes draped in plastic bags and a lot of sidewalk feces).

The bathroom on the ferry had a floor-length mirror, so for the first time that day, I looked at myself. Strong. Capable. Then I turned around. That's when I realized I was a half-naked doofus wearing a gray jump rope and a nursing bra.

I peed still wearing my newborn. Then I walked back to SJ and my then-seven-year-old stepdaughter, who were sitting in a booth eating hot dogs.

Later that month, I bought a slew of cheap-ass cotton nursing tops, and I wore these, almost everywhere I went, for nineteen months, as I nursed at home and pumped at work.

You Look Tired: An Excruciatingly Honest Guide To New Parenthood is available for pre-order.