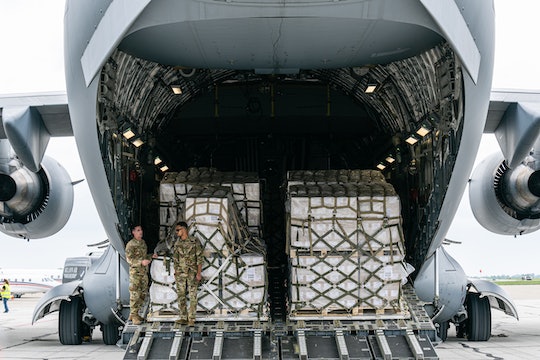 President Joe Biden’s Operation Fly Formula has officially brought more than 70,000 pounds of specialty infant formula to the U.S. to aid families as the current formula shortage crisis continues to affect babies and children across the country.

On Sunday, Biden announced the first infant formula shipment from Zurich, Switzerland had been transported to Germany then loaded on federal aircraft from en route to Plainfield, Indiana. But what formula was delivered? And will there be more? Here’s what you need to know about Operation Fly Formula.

What is Operation Fly Formula?

Biden launched Operation Fly Formula to get safe formula to the U.S. as soon as possible through the use of federal planes. “I know parents all across the country are worried about finding enough infant formula to feed their babies,” Biden said in a video statement posted to Twitter May 18. “As a parent and as a grandparent, I know just how stressful that is.”

Biden directed the Department of Health and Human Services (HHS) and the U.S. Department of Agriculture (USDA) to use Department of Defense (DOD) commercial aircrafts to pick up formula from overseas. “DOD will use its contracts with commercial air cargo lines, as it did to move materials during the early months of the COVID pandemic, to transport products from manufacturing facilities abroad that have met Food and Drug Administration (FDA) safety standards,” the White House said in a statement. “Bypassing regular air freighting routes will speed up the importation and distribution of formula and serve as an immediate support as manufacturers continue to ramp up production.”

What formula was delivered?

Alfamino® Infant, Alfamino® Junior, and Gerber Good Start® Extensive HA — all of which are hypoallergenic formulas for children with a cow’s milk protein allergy — will be delivered as part of Operation Fly Formula, according to a statement from the White House. The first delivery included Nestlé Health Science Alfamino Infant and Alfamino Junior formula; Gerber Good Start Extensive HA formula will come in the next few days.

“These formulas have been prioritized because they serve a critical medical purpose and are in short supply in the United States because of the Abbott Sturgis plant closure,” stated the White House.

How much was delivered?

White House Press Secretary Karine Jean-Pierre told reporters 78,000 pounds of infant formula were delivered to the U.S. Sunday’s delivery was 132 pallets, with another 114 pallets of set to arrive in the next few days.

On Sunday, Biden shared two pictures of infant formula loaded on a plane on Twitter, along with the note, “Our team is working around the clock to get safe formula to everyone who needs it.”

When will this formula be available?

Where is the formula going?

Indianapolis was chosen as the destination for the first formula shipment because it is a Nestle distribution hub, according to an administration official on site of the delivery, according to ABC News. “The formula will be offloaded into FedEx semitractor-trailers and taken to a Nestle distribution center about a mile away where the company will do a standard quality control check before distributing the supplies to hospitals, pharmacies and doctor's offices,” ABC News reported.

On May 22, Biden shared an update on Operation Fly Formula on Twitter, announcing a second shipment of specialty infant formula. The total amount of formula delivered to the U.S. will include 246 pallets of formula, which is the equivalent of up to 1.5 million 8-ounce bottles of formula.

“We have secured a second flight to transport Nestlé specialty infant formula to Pennsylvania,” he wrote. “The flight and trucking will take place in the coming days, and I will continue to keep you updated.”

According to a White House statement on May 22, the second shipment will come from Ramstein Air Base in Germany to Washington Dulles International Airport.

“From there, the formula will be transported to a Nestlé facility in Pennsylvania,” the White House said. “DOD is contracting with FedEx Express to transport the shipment via its integrated air and ground network. The flight and trucking will take place in the coming days. More details on timing will be announced when available.”

What else is being done to help the formula supply shortage?

Earlier this week, the House passed two pieces of legislation to help the current formula shortage crisis affecting families across the country: The Access To Baby Formula Act and The Infant Formula Supplemental Appropriations Act.

Biden shared another update on May 22 addressing the infant formula shortage. “This evening, I announced our first two Defense Production Act authorizations for infant formula for Abbott Nutrition and Reckitt,” he wrote on Twitter. “This allows the two infant formula manufacturers to add legally binding language to their orders with suppliers that will give them priority.”

“I will continue to identify additional opportunities to invoke the DPA and further increase infant formula production to maximum capacity,” he added.

What can parents do in the meantime?

If you are struggling to feed your baby, there are several resources to help, including signing up for the Free Formula Exchange. You should reach out to your health care provider if you need immediate help feeding your baby.

More Like This
How To Properly Clean An Inflatable Pool
The 6 Best Swim Diapers On Amazon — Plus, Expert Tips For Choosing Them
The Covid Vaccine For Kids Under 5 Has Been Sent To The FDA For Review
6 Takeaways From The White House’s First-Ever Parents Press Conference