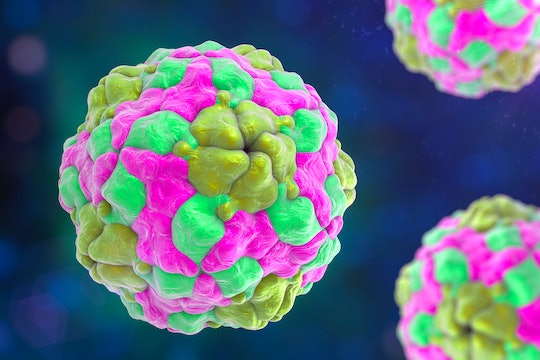 Here’s what you need to know about this potentially serious virus.

The last few years have surely been an epidemiological nightmare. Covid-19, Covid variants, mysterious hepatitis in children, monkeypox. Now the U.S. Centers for Disease Control and Prevention (CDC) has issued a health advisory to caregivers of young children for something called the parechovirus. So what is the parechovirus? What are the symptoms of parechovirus? Here’s what you need to know.

Parechovirus, which is often written out as PeV, is kind of like “coronavirus” in that this describes a type of virus and only one species — PeV-A, which has three different variants — is known to cause disease in humans. While “variant” has become commonly associated with “new version” during the Covid pandemic, the variant that appears to be most prevalent in the U.S. at the moment, PeV-A3, is not new, either.

The CDC notes that most children (upwards of 95%, in fact) will contract a parechovirus at some point before kindergarten and be none the wiser, chalking it up to a run-of-the-mill viral infection. The agency wants to ensure that doctors are aware that PeV — which circulates mainly in summer and fall in a somewhat cyclical pattern, peaking every two to four years — has currently been observed in the general population since May. And care providers should take the possibility of PeV-A3 into consideration when diagnosing and treating patients.

“To date, all PeV positive specimens tested and typed at CDC were type PeV-A3,” the alert reads. “Because there is presently no systematic surveillance for PeVs in the United States, it is not clear how the number of PeV cases reported in 2022 compares to previous seasons. PeV laboratory testing has become more widely available in recent years, and it is possible that increased testing has led to a higher number of PeV diagnoses compared with previous years.”

What are the symptoms of parechovirus?

The most common symptoms of the illness coincide with symptoms of any number of other viruses, chiefly upper respiratory tract infection, fever, irritability, diarrhea, and/or rash.

However, among infants younger than 3 months old, and especially in infants younger than 1 month, severe illness can occur, including sepsis-like illness, seizures, and meningitis (a swelling of the protective membranes covering the brain and spinal cord) or meningoencephalitis (a swelling of both the meninges and the brain). Signs of meningitis include headaches, fever and a stiff neck.

Testing for PeV can usually be done via commercial clinical laboratories and hospitals, but can also be done via the CDC when no other options are available. Most children, however, even those suspected of having PeV-A3, will not be tested for it, since most cases are not serious and management of the illness (which usually resolves without intervention) is the same regardless of the test result. (Not to mention testing can be expensive.)

PeV-A3 is known for being especially severe, but serious illness is still rare.

Of the PeV-A variants, PeV-A3 is the one most often associated with severe disease, though serious illness is generally rare, according to the CDC. The virus is spread by both symptomatic and asymptomatic infected individuals either via a fecal-oral route (ew... but a good signal to wash you hands thoroughly and often) and respiratory droplets. Respiratory spread can occur for about one to three weeks whereas gastrointestinal spread can happen up to six months post-infection. The incubation period is unknown.

While most people, including children, who contract PeV-A will not be seriously ill, the virus can pose a serious threat, particularly among very young babies, the elderly, and immunocompromised people. Among babies, organ damage resulting from the virus can cause developmental disability.

An infant in Connecticut died of parechovirus in July.

Ronan DeLancy was just 34 days old when he died of parechovirus. His mother, Kat, noticed he was behaving strangely when he was about 10 days old.

Ronan was just 34 days old when he died, leaving behind his parents and older sister.

“He was very angry, crying a lot,” she told WTNH. “He had redness on his chest, and a couple days prior, had redness on his face.” The pediatrician wasn’t concerned, but when he failed to improve later that evening Kat brought him to Yale New Haven Children’s Hospital, where his condition quickly deteriorated. He began seizing, and over time those seizures became harder to control. After running a battery of tests to discover the cause of his illness, a lumbar puncture showed that the infant had contracted parechovirus. After 20 days in the hospital, the baby died.

“They came in and broke our hearts and told us the damage got so bad that it created holes in his brain,” DeLancy told WTNH. “It makes no sense to me because we were so incredibly cautious about Covid and minimizing any exposure to anything.”

The family has launched a website Research for Ronan, to raise awareness of parechovirus in the hope of securing funding to research treatment and vaccines.

How can you protect yourself and your family?

There is currently no vaccine for PeV. Neither is their treatment for the virus other than management of symptoms. Practitioners therefore suggest the best course of action is standard virus protection measures, including regular hand-washing (ideally with soap and water), especially after using the toilet and changing diapers, covering sneezes and coughs with your arm (not your hand), and, of course, staying home if you’re ill. If you must be out of the house and you feel symptoms, wear a mask. If your child is infected, keep them home for 48 hours. If possible, take your child to the doctor if they’re feeling unwell. If they are unusually “floppy” or drowsy and can’t easily be woken, go to the nearest emergency department.

More Like This
Why Fewer Newborns Will Need Jaundice Treatment Under New AAP Guidelines
Everything Parents Need To Know About Monkeypox
20 Weird But Genius Health & Beauty Tools For Babies
2 Million MamaRoo Swings & 220,000 RockaRoo Rockers Have Been Recalled