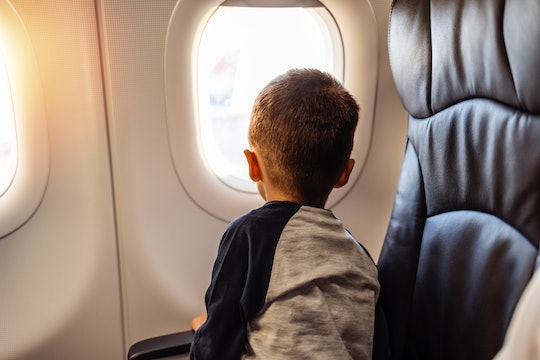 To headphone or not to heaphone...

In the illustrious history of Al Gore’s internet, there are some subjects that we’ve learned will inevitably escalate quickly before delving into hyperbole: name-calling, and, of course, viral infamy. Many of them are issues related to parenting, and none, perhaps, get as heated as anything having to do with children on airplanes. A recent post on Reddit’s Am I The A**hole (AITA) forum about a parent playing cartoons for their toddler on a plane recently went viral before ultimately being deleted by moderators. “Moderators remove posts from feeds for a variety of reasons,” the post now reads. “Including keeping communities safe, civil, and true to their purpose.” Yikes.

Because the internet is forever, screenshots of the original AITA post were subsequently posted Twitter. For the uninitiated, AITA is a Reddit forum where people post their awkward social situations and ask whether or not they were the party in the wrong. Self-appointed judges can then weigh in with “NTA” (not the a**hole), “YTA” (you’re the a**hole), “NAH” (no a**holes here), or “ESH” (everyone sucks here). In this post, a parent shares their situation: a 4.5-hour flight home from Thanksgiving with their 4-year-old and “rowdy” 22-month-old, whom they described as “hard to handle in pretty much any circumstance, let alone on an airplane.”

So they turned to screens, specifically Ms. Rachel on YouTube. But there’s a problem: their toddler won’t wear headphones. As such, the parent played the videos “so that it was audible over the noise of the plane” without being, in their estimation, “overly loud.”

Unfortunately, that’s not how the person in the row in front of them saw it.

“After 15 minutes, he turned around, clearly annoyed and asked if my 1 year old could wear headphones,” they wrote. “When he turned I saw that he only had one earbud in, not both. I told him no, he won't keep them on and I'll try to lower the volume. I did but my toddler then lost interest because he couldn't hear it, so I turned it back up. Judgmental looks ensued but I just ignored him for the rest of the flight. I mean, Ms. Rachel is better than a screaming kid, right?”

They go on to ask readers what they think and conclude, “I just feel like with today's noise canceling tech, if you want quiet on an airplane, it's easier for you as an adult to wear headphones than control what others are doing.”

The responses to the original post are, as previously stated, lost to time. But some of the responses to re-shares on Twitter give us an idea of just how fraught it had to have been, especially since it was deemed harmful by moderators.

Filipovic’s reshare garnered a lot of debate in the replies...

The response was... mixed.

“This [is an] extremely fair take,” replied @quitabunnies. “Other people never want to listen to other's electronics no matter the age of said person.”

“Yah — no,” agreed HuffPost’s Noah Michelson. “I don’t want to hear anyone’s anything anywhere: not the kid’s cartoon on a plane. Not the guy’s boombox on the subway. Not the grandma’s soap opera at the laundromat. No. No. No. Get headphones or get out.”

“The world is not your living room,” asserted @markehstrong. “My job as a parent in a shared public space is to ensure that my children are not being a nuisance to others.”

Others, however, were more sympathetic to a parent traveling along with two small children.

“This makes me so sad,” tweeted journalist Lena Jakobsson. “I traveled full-time for 20 years before having my son, and I’ve flown extensively with him for the past eight. Kids, and the messiness they bring, are part of any society. You never know what someone is going through. Be generous when you can.”

“I am both a parent who has never had to resort to this, and an adult who can tolerate other people’s foibles without being such a whiner,” @AmbrosiaVoyeur offered. “I side with the mom traveling with two children under 5. That’s really hard. It’s survival mode.”

“You realize the alternative is a screaming child right?” @RNelly17 pointed out. “There’s no scenario where the 1 year old would just quietly sit still on a plane for hours without being entertained in some way.”

It really does seem to be a scenario without a really great solution for all parties. Our take: when it comes to kids on planes, do your best to be simultaneously as considerate and compassionate as you can, whether you’re a parent or a fellow passenger.