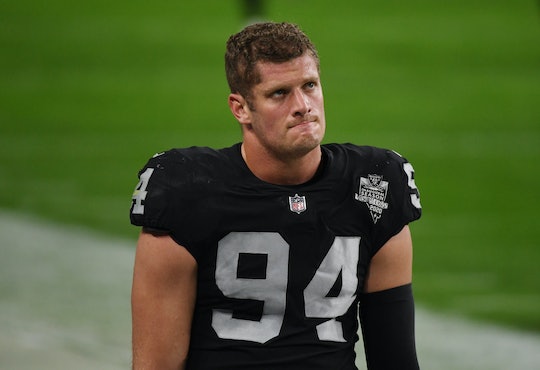 “My son is gay. Every time someone of your status comes out it makes life better for him.”

Las Vegas Raiders defensive end Carl Nassib made history on Monday when he announced on social media that he is gay, making him the first openly gay active player in the NFL. As a professional football player, Nassib is setting the bar for future generations to embrace exactly who they are, no matter what they might do for a living. It was an important, emotional moment that parents responded to with support and admiration.

In a video shared on Instagram, Nassib said he had “agonized over this moment for 15 years” before explaining why he decided to come out publicly. “What's up people? I'm at my house here in West Chester, Pennsylvania,” he began. “I just want to take a quick moment to say that I’m gay. I've been meaning to do this for a while now, but I finally feel comfortable enough to get it off my chest. I really have the best life, I've got the best family, friends and job a guy could ask for.”

“I'm a pretty private person so I hope you guys know that I'm really not doing this for attention,” he continued. “I just think that representation and visibility are so important. I actually hope that like one day videos like this and the whole coming-out process are just not necessary, but until then I’m going to do my best and my part to cultivate a culture that’s accepting, that’s compassionate.”

Nassib went on to say that he would be donating $100,000 to The Trevor Project, an LGBTQ+ teen suicide prevention nonprofit.

Carl Nassib came out as gay.

Nassib’s video was met with heartfelt support from parents, politicians, and more who were excited to see positive representation in sports.

“It’s so important to show LGBTQ+ kids that they belong everywhere — especially in places like the @NFL,” Rep. Mondaire Jones tweeted. “Thank you for your courage, Carl. This means so much to so many people.”

People are excited about Carl Nassib coming out.

When the NFL tweeted support for Nassib, one mom wrote in response, “Good on you. My son is gay. Every time someone of your status comes out it makes life better for him.”

Another parent thanked Nassib for his “bravery and generosity” in honor of his LGBTQ+ son.

One parent was also appreciative of the courage it took for Nassib to come out, something they understood after their own son was bullied for coming out. “Thank you to Carl Nassib for his bravery,” they tweeted. “It is so difficult especially for young people like my son who came out in high school and was targeted for bullying for something that wasn't a choice for him. It was part of who he is.”

Carl Nassib is being called brave by parents.

Sports writer and dad Eric Adelson noted that “somewhere there’s a kid who feels a little less isolated and scared because of what Carl Nassib did today. And that is heartening to think about.”

Another parent was especially grateful to see a “prominent public figure” paving the way for their own son.

Carl Nassib is paving the way for future generations.

Nassib even managed to make one dad of an LGBTQ+ child a proud Raiders fan with his courage. For one day, at least. “I’ll go back to disliking the @Raiders tomorrow,” editor Todd Harmonson tweeted. “Today, they and Carl Nassib have the admiration of a dad who’s glad the world continues to improve for LGBTQ kids, including his own.”

One social media user pointed out the importance of a supportive family for LGBTQ+ kids, noting they were “one of the lucky ones.”

Supportive parents can make all the difference for LGBTQ+ kids.

Finally, this parent simply wanted to thank Nassib for “helping to change the world” as an important role model.

Carl Nassib is being praised.

Carl Nassib’s decision to come out and, what’s more, draw attention to LGBTQ+ teen suicide prevention is being praised for all the right reasons. Visibility matters. Representation matters. Love matters.