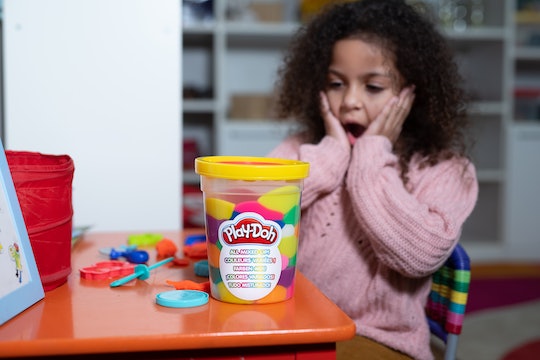 Parents, on the other hand, have mixed feelings.

After years of leaving parents near tears in frustration over the jumbled up mess their kids were making, Play-Doh’s new “All Mixed-Up” Can comes along. This can of Play-Doh features all of the colors pre-mixed and, understandably, parents are having some feelings about it. Is this what we wanted? Or the exact opposite of what we wanted? Let’s investigate together.

To celebrate the 65th anniversary of the existence of Play-Doh, that colorful clay kids have been loving for generations, Hasbro Inc. released a new type of Play-Doh. A 44 oz. tub of the clay with all of the colors mixed up together. So exactly how most Play-Doh in every household ends up after kids play with it for a few hours. After they’ve taken all of the colors and squished them together in a bright, colorful ball.

Now kids can get nearly 3 lbs. of their Play-Doh pre-mixed, and it comes in a big clear tub which the company said in a press release is pleasing to the eye for kids aged 2 and up. “With Play-Doh compound, the imperfect is perfect, the mess is a masterpiece, and colors are meant to be mixed!” Eric Nyman, Chief Consumer Officer at Hasbro, said in a statement. “In honor of our 65th birthday, we invite parents to take a deep breath and let Play-Doh happen, because just like life, play should be messy, fun, and wonderful!”

But what about parents? Apparently Play-Doh released the All Mixed Up Can of colorful clay to encourage parents to relax a little, embrace the mess. So much so that the company created two new hashtags, #TeamMIXITUP and #TeamKEEPITCLEAN to see how parents felt about the new look. Don’t worry, they have lots of feelings.

Some parents are pretty happy to just keep on buying separate tubs of colored clay and keep it all tidy. “I’m #TeamKEEPITCLEAN all the way!” one parent tweeted. “Even as a kid I hated Play-Doh being mixed up, so this is basically my worst childhood nightmare come true.”

“No more mixing play dough anxiety,” one person tweeted, while another just wrote, “triggered” with a photo of the new All Mixed Up Can.

Finally, one parent admitted, “I thought this was a The Onion piece at first,” perhaps because pre-mixing Play-Doh might seem like a great idea for a satirical article.

However you feel about mixed up Play Doh or keeping the colors separate, you can buy the All Mixed Up Can at Amazon and Target for $14.99. And then let us know how it went.