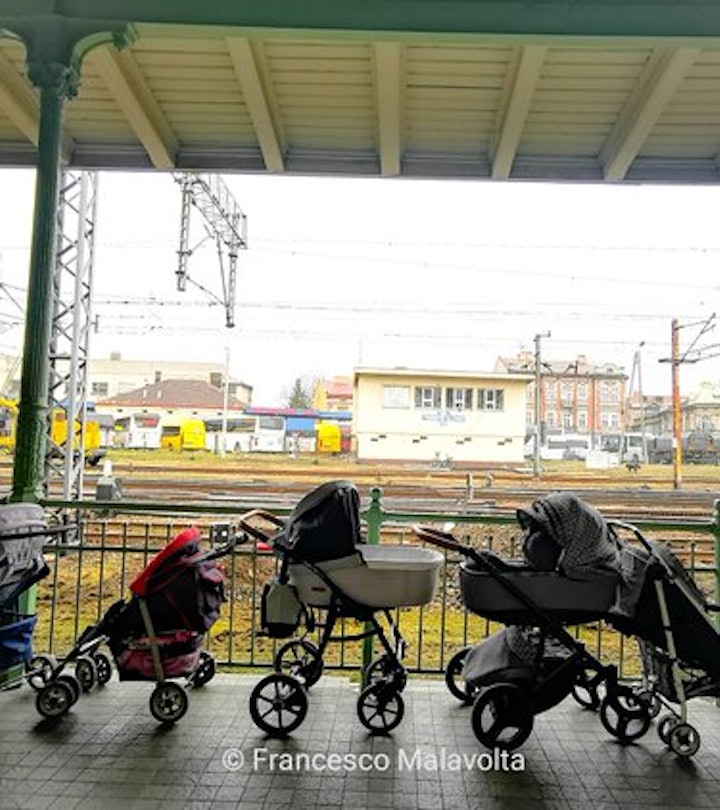 The Russian invasion of Ukraine has been full of harrowing and heartbreaking images of a country suddenly at war. But every now and then, a glimmer of goodness can be found amid the chaos. On March 3, photojournalist Francesco Malavolta – who specializes in documenting human migration to and within Europe – captured a touching, hopeful moment during the evacuation. In the Przemyśl Główny railway station in Poland, locals had left an assortment of strollers for refugees arriving with babies and small children.

“What a great humanitarian gesture from the Poles,” tweeted @MarAlPaRam (in Spanish) in response. “Migrating from one country to another in a hurry and with a few changes of clothes must be terrible. Blessings to the Polish people.”

“What a magnificent gesture of solidarity,” agreed @mpharmacienne (in French), noting, “The strollers also appear to be accompanied by childcare essentials.”

The need for all these items is indeed dire. The Russian invasion of Ukraine has prompted a mass exodus the likes of which Europe has not seen within its borders since World War II (though, certainly, refugees arriving to Europe from Africa and the Middle East reached similar levels in 2015). The United Nations High Commissioner of Refugees, Filippo Grandi, told Face the Nation on March 6 that an estimated 1.5 million Ukrainians have fled their homeland into neighboring countries. The United Nations Refugee Agency expects this number will only go up and may even reach four million if conditions on the ground do not improve. The UN states that currently, Poland has accepted the largest share of Ukrainian refugees, though many have also come through Slovakia, Hungary, and other points throughout Europe.

“It's mostly women, children, elderly, many disabled people,” said Grandi, “and they are above all, frightened, traumatized. These are people that until just a few days ago, had a perfectly normal life. And in... in a matter of hours, everything is thrown apart.”

By March 7, it would seem that the idea of leaving strollers for refugees spread across the border into Slovakia. Malavolta captured a similar image which he posted to his Instagram account, writing (in Italian) “After the Przemyśl railway station in Poland... on the border between Slovakia and Ukraine, strollers are brought for those mothers who are forced to flee Ukraine with their newborns.”

Certainly, those fleeing Ukraine need more than strollers and baby supplies – they need food, shelter, and, ultimately, a peaceful and independent nation to return to as soon as possible – but any parent can agree that things like strollers, blankets, and diapers are nevertheless essential, and the gesture from their supporters in neighboring countries is surely a kind one.

More Like This
This Free Website Connects Parents Who Need Formula With Those Who Have It
Here’s What You Need To Know About That Viral 1960s Baby Formula “Recipe”
Gerber's New Spokesbaby Isa Has The Biggest Brown Eyes & Was Born With A Limb Difference
Who's Getting Abortions? Mothers. 59% Of Abortion Patients Already Have A Child.