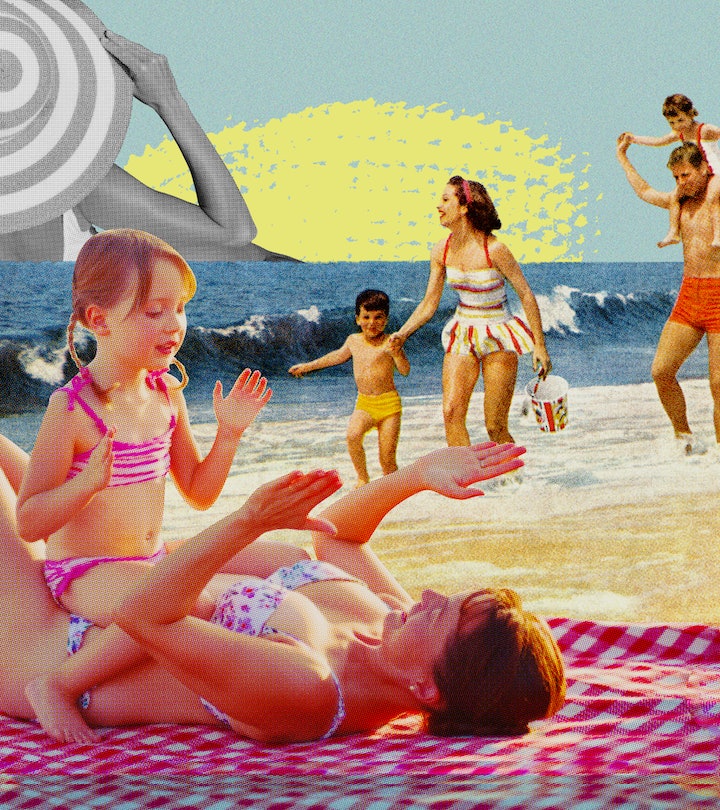 Throw out your one-pieces. It’s time to party.

I used to wear bikinis. The summer I was 17, I wore one every single day. I’d put on my coral pink J.Crew two-piece, drag a lone lawn chair into my backyard, slather my hair in Sun In and my body in coconut oil, and lie for hours listening to Sarah McLachlan on my Sony Discman. I had a fantasy that some cute boy would walk by my house and think, she looks so cool with that discman and so good in that bikini, I might just ask her out.

It didn’t happen, obviously. But I continued to wear bikinis, at various beaches and pools and disgusting spring break locales, until I got pregnant with my first child. He was born in September, so that summer I was massive, hot, and in no mood to frolic sexily in the waves. I’ve seen many adorable, heavily pregnant women in bikinis; their confidence has always awed, and, quite frankly, scared the sh*t of out me. I had a very sweet one-piece, polka-dot maternity suit, but by the time I was nine months, the fabric had thinned and stretched and I thought, oh, just bag it. Then I stopped going to the beach altogether.

What I thought was a season off soon became the better part of a decade. The following year I was breastfeeding, then I got pregnant again, then I had another baby, then I was breastfeeding again, all the time wearing a few sad, black one-pieces with easy boob-access. During that time, my body, normally so dutiful, started to rebel. There was skin where there didn’t used to be skin. There were rogue moles and jiggly places and hips that were bigger and mysterious marks that my 3-year-old liked to point at and ask, “What’s that?”

I had settled into the idea that bikinis were a thing of my past, like long hair and low-rise jeans.

Going to the beach became less a fantasy about attracting men and more a harrowing ordeal to survive. Who cares if you look cute while carrying a screaming 2-year-old over hot sand and trying to prevent a 4-year-old who can’t swim from jumping into the ocean? You watch your baby inhale sand and then poop it out. You eat soggy Cheddar Bunnies out of desperation. You do not think much about your bathing suit.

During one of our first outings as a family of four, I trudged past a group of teenagers gossiping in the sun, their taut butts shining in thong bikinis, guys hovering like hungry mosquitos. I was loaded down with towels, toys, sunblock, snacks, an umbrella, a tent, hats, rash guards, diapers, and wipes, and I thought, enjoy it while it lasts, girls. Then I splashed with my babies in the water, took loads of pictures, and felt nothing but relief to be a happy grown-up instead of an insecure, though beautifully nubile, 17-year-old.

I settled into the idea that bikinis were a thing of my past, like long hair and low-rise jeans. I’d invest in some sassy old lady one-pieces, which dipped in the front or had embellishments in the back. I’d change my name to Dorothea or Blanche. But as this cold, isolated winter wore on, and my brain started to break from the monotony and incessant child care, I began to dream once again about bikinis. I’d close my eyes and transport out of our crowded apartment to sunnier, less stressful scenarios — a trip my husband and I took to Greece before we had kids, my friend Victoria’s pool, where I spent long teenage summers, the beach on Fire Island that I lived at growing up.

My husband told me I looked like a Bond girl. It was the nicest thing I’d heard since lockdown began.

Daydreams turned into online shopping and out of the thonged masses rose a category I like to think of as the mom-bikini. Technically they’re just high-waisted bikinis with full coverage on top. The bottoms are like colorful Spanx that go up above the belly button, exposing about 4-inches of rib cage. They’re demure with a hint of sex appeal; they’re not made with men in mind, which is sort of the point. I got a great one from the brand Vitamin A, and when I tried it on my husband told me I looked like a Bond girl. It was the nicest thing I’d heard since lockdown began.

We recently ventured to Miami for spring break, and I packed an entire suitcase full of mom-bikinis. On our first pool day, I schlepped the towels and toys and goggles and floaties and snacks and sunblock, passing a pair of women in one-pieces, one of whom was holding a baby no older than 4 months. We gave each other the tired-mom nod, and then I followed my 5-year-old to the pool to watch him swim to the deep end and back. I’d chosen my Bond girl suit, because why not, and I took off my coverup, exposing my pale rib cage flesh to the sun for the first time in six years. There was my skin. There were my moles. There was the sliver of stomach I’d been hiding away. It wasn’t so bad!

I got up to adjust my son’s goggles, because what is pool time other than endlessly adjusting goggles, and the mom holding the 4-month-old beckoned me over. “We just love your bathing suit,” she said, the woman next to her nodding along. “Where is it from?” I beamed. I smiled. I was happier, even, than if I’d been asked out by a cute boy walking by my house in 1998.

“That’s a very good idea,” I told her. “I think we’re ready for a Hot Mom Summer.” She giggled and fixed her baby’s hat, and as I said it, I actually believed it.

Turns out I didn’t need to put on a muumuu and call it a day. When we go to the beach this summer, after I slick my sons with zinc oxide, help them pee in the ocean, and build 1,000 drip castles, I’m going to lie out on a towel in one of my mom-bikinis. I will feel the sun beating down on my lightly wrinkled face. I will put Sarah McLachlan on iTunes and take off my big hat. And I will remember that just because I’m 40 with children doesn’t mean that I’m dead.