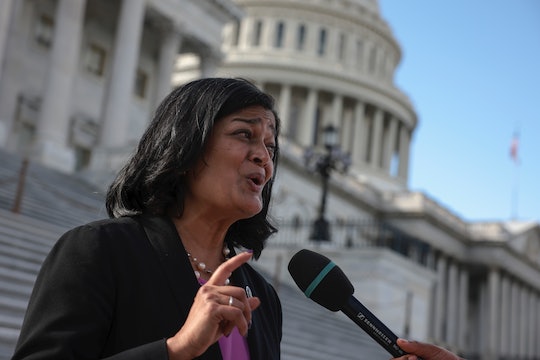 “There was no way I could have another baby at that time and that I could not go through what I had gone through.”

As Congress mulls over how to respond to conservative states’ attempts to severely restrict access to abortion services, Rep. Pramila Jayapal shared her own abortion story alongside two other members of Congress this week. In an interview with NBC News, Jayapal revealed she experienced suicidal ideation following the premature birth of her child in the mid-90s. When Jayapal unexpectedly became pregnant for a second time, she said it was the difficulties of her first pregnancy and her experience with postpartum depression that ultimately led her and her partner to decide on abortion.

“I just realized that there was no way I could have another baby at that time and that I could not go through what I had gone through,” Jayapal told NBC News. “I had gone through postpartum depression after Janak’s birth. I even contemplated suicide at one time and I knew that I was not ready to go through that again.”

Jayapal revealed she’d had an “incredibly difficult pregnancy” with Janak, who was born prematurely and experienced some health issues. “We knew they were going to live, but they were still having seizures,” the House rep said of her child.

When Jayapal discovered she’d unexpectedly become pregnant for a second time despite using contraceptives, she said she discussed the issue of abortion with her partner. “I knew that I was not ready to go through that again and that I needed to be strong for Janak,” she told NBC. “And so, I spoke to the person who became my husband, my loving partner, at the time. He was completely supportive, and I decided to have an abortion.”

On Thursday, Jayapal spoke again about her decision to have an abortion alongside Rep. Cori Bush and Rep. Barbara Lee in a hearing before the House Committee on Oversight Reform, which met to discuss how Congress should respond to states like Texas that have passed laws severely restricting abortion access. In Thursday’s hearing, Jayapal said doctors warned her after Janak’s birth that future pregnancies would likely be high risk for both her and the child and be similar to the difficult pregnancy she’d experienced with Janak.

“I very much wanted to have more children,” KIRO reported she told the committee. “But I simply could not imagine going through that again.” Jayapal has noted ending her pregnancy was one of the most difficult decisions she’s made, but stressed it is a decision women needed to be able to make for themselves.

“As one of the one in four women across America who have had an abortion, I know that terminating my pregnancy was not an easy choice,” Jayapal tweeted Thursday. “But it was MY choice.”