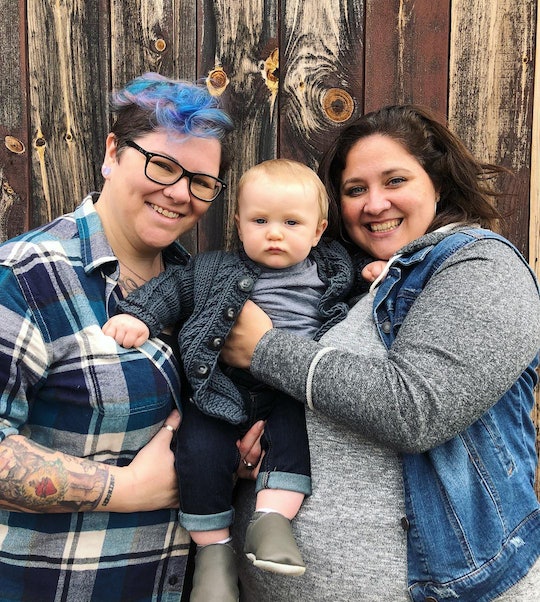 Dese’Rae has been undergoing fertility treatments since 2017. In January, she welcomed a son, carried by her wife. This is the seventh installment of her Trying diary. You can read the previous entry here.

Pregnancy dreams are no joke. I had a nightmare so violent and terrifying, and in such detail, that I woke up breathless. I occasionally have difficulty late into the night that sends me into a panic (sometimes related to dreams, but more often related to depression or anxiety); in the years we’ve been together, I’ve rarely woken Fel because of it.

But this dream, the redness of the blood, the viscosity of it, the running and the pounding of my heart and footfalls in time, and that, in the end, someone I trusted to keep me safe ultimately betrayed me by acting too slowly… it was too much to bear alone, even with the knowledge that it was just a dream and I was safe in my bed. I had to wake Fel, and even then, I couldn’t shake it. I was so scared that I was too afraid to go to the bathroom alone, so she came with me. Once I finally got back to sleep, I had another gory dream which, no surprise to anyone who knows me or my work, included suicide (occupational hazard, I guess).

Outside of the challenges inherent in each, infertility and pregnancy have brought all kinds of other feelings to the surface.

That’s what the doctor said when we walked into his office after our last ultrasound. He talked a lot about our "persistence," which was difficult for me to hear. Persistence isn't what got us here; insurance coverage is what did it. Four IUIs and five IVF cycles — I couldn't have done that without miraculous insurance. Sure, I had to build up emotional and physical fortitude. Sure, we spent thousands on medication and donor sperm. But most other families don't have the privilege of insurance that will cover these treatments (or the cash to pay up front), and the implication that they're giving up because they can't find the means?

We shouldn’t have to tear our hearts and our bank accounts and our bodies apart for the privilege of having children.

Does pregnancy brain amplify fear, or have I just naturally arrived at some emotional crossroads that requires me to take a look at a bunch of trauma I’ve been carrying around? Between the Kavanaugh hearings, #MeToo, and my dreams, I'm struggling with confronting difficult parts of my past.

My social feeds are filled with stories of sexual assault, which compelled me to reflect on my own. I was raped in 2007 or 2008, but it took me years to realize I’d even been raped and to name it, because what happened to me wasn’t violent. A friend offered me a place to crash after a night out. He said, “I’ll take care of you.” He said, “I won’t take advantage of you.” He waited until I was asleep, and then he had sex with me. What happened to me didn’t match my understanding of rape as a violent act. But I didn’t give consent. I couldn’t. I was sleeping.

I’m also struggling with an enduring fear of someone invading my home and hurting me and my family — a fear I’ve carried with me since I was a kid — but now I'm actively seeking out ways to make our home safer. I’m researching security systems and having conversations with friends about things like baseball bats and guns and Tasers, things that force me into having to consider my ability to confront an intruder head-on.

I’ve been asking questions about how these things integrate into a person’s psyche over time, especially when confronted with the reality of bringing another life into the world. How do I protect this little person?

I bought my first maternity clothes. I guess I’m slowly settling into believing this is happening. I'm allowing myself some hope, and thinking about what my future with this embryo could look like.

I'm letting go of my fear some, but I'm eagerly anticipating hitting the 11-week mark so we can get the genetic testing out of the way. I want to know this baby is healthy and, of course, I want to know their sex (even though I have a feeling). Knowing the testing is on the horizon, we've had hard conversations about what will happen if we find out there's a high risk for Down Syndrome versus Trisomy 13 and 18. The former means a potentially hard life for the child, and for us. The others mean a short life filled with pain for the child, and I can't abide by that.

But I hate the thought of possibly having to let go of this little creature we fought so hard to make. As a woman with low ovarian reserve, my chances of passing on these chromosomal anomalies are higher than the average bear.

Even though I’m letting go of some of my fear, I guess I’m still waiting for the other shoe to drop.

I think the hormones that were keeping me nice and calm and even-keeled have given way to the emotional lability we expect of pregnant women.

I cried the other night because I was just so fucking tired of eating. Eating has started to feel like a full-time job and super effortful — even the cravings that were once fun are just work now (I love that I’m as interested in Lucky Charms as I was when I was a kid, but I don’t love that my body wakes me up at 5 a.m. just to eat them). I was so tired of eating and I just didn’t want to eat and nothing sounded good to me, but I knew I had to eat or I’d get sick.

I’ve said before that infertility makes you petty. When you’re in it, you think about all the people who had kids who shouldn’t have. You can find yourself going down some really gross, shame-y paths that you otherwise wouldn’t travel. And you get so sick and sad and frustrated for all the people who struggle with their biology. But the problem is not with people who had an easier go of it. The problem is with insurance companies not viewing this as vital medical treatment worth covering. Truly, if we didn’t have coverage, we would have zero children. People with assets go deep into debt just to fulfill their dreams of having a family. We have no real assets.

People will often suggest adoption as a way out of infertility limbo (these are usually people who haven’t suffered the ills of infertility, who don’t have the biological drive to carry a child, or who don’t have children at all), as if most of us who are infertile haven’t looked into it. Adoption isn’t easy. Period. You have to prove you’re fit to be a parent through interview upon interview, strangers invade your life and your home, and navigating the system is difficult. Your medical records — including mental health histories — are heavily scrutinized. And if you happen to be looking for an infant, it’s difficult and extremely expensive. Plus, if you’re a lesbian couple, you may not be protected against discrimination in the adoption process by state law. Adoption is just as fraught and complicated as fertility treatment.

At the end of 11 weeks, most patients have “graduated” from their fertility clinics and begin being seen by an OB-GYN or midwife. As I approach this milestone, I know I should be ecstatic, but I’m filled with worry.

If things go wrong, if I lose this baby (despite the extremely low likelihood of that happening), I know this much: I know I can’t do this anymore. For better or worse, I will never be a patient at our clinic again. My persistence has reached its end.