Dese’Rae L. Stage is an award winning artist, public speaker, and suicide prevention activist. She created Live Through This (http://livethroughthis.org), a multimedia storytelling series that aims to reduce prejudice and discrimination against suicide attempt survivors. Live Through This has received media coverage from TIME, New York Times, and CBS Evening News. Dese’Rae is featured as the main character in a documentary about suicide prevention advocates called The S Word, now screening nationwide. She lives in Philadelphia with her wife and son. 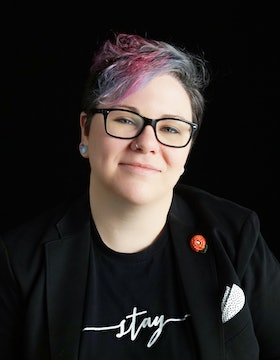 What Queer Families Deserve In The Birthing Room

Childbirth Was Still Traumatic, Even Though Everything Went According To Plan

I Was Told I Didn't Want To Have An Elective C-Section... But I Do

When You're Pregnant, The Depression Isn't Yours Alone

Pregnancy Sucks, No Matter How Badly I Wanted It

Trying For A Baby In A Homophobic Country

You Want To Have A Baby, But What Do The Blood Tests & Background Checks Say?

I Gained A Newborn, Lost A Pregnancy, & Almost Lost My Wife... All In 2 Weeks

When Your Wife Almost Dies, Do You Still Want To Try For Another Baby?