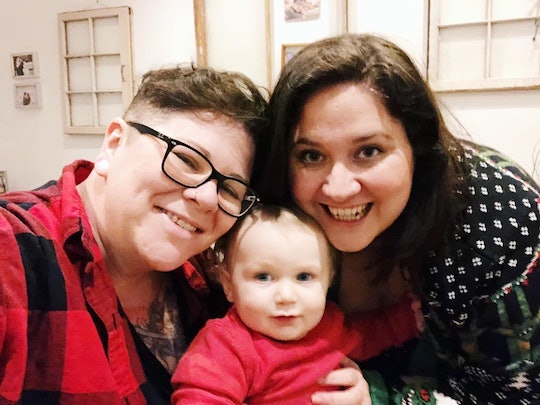 Dese’Rae has been undergoing fertility treatments since 2017. In January 2018, she welcomed a son, carried by her wife. This is the tenth installment of her Trying diary. You can read the previous entry here.

I grew up thinking I didn’t want children.

I came of age as a queer person in the late '90s, when intolerance toward LGBTQ+ folks seemed at its peak. I’ve touched on this before: people were being murdered based solely on their sexual orientation and gender identity; marriage equality was not on the minds or tongues of the general public; it was actively illegal for anyone who identified as LGBTQ+ to adopt in most places; and the at-home ICI (intracervical insemination) undertaken by Ellen DeGeneres and Sharon Stone in If These Walls Could Talk 2 seemed nothing short of fantastical.

A “normal” life didn’t seem in the cards for me, whether I wanted it or not.

Something changed in my early twenties, though. I graduated from college, I maintained a home and bills, I had a long-term partner. I realized the potential that I might someday have some modified version of that “normal” life.

I knew, theoretically, that pregnancy might be difficult for me based on my mental health history and my mom’s experiences.

Pregnancy became an experience for the bucket list — achievable (if difficult to come by), magical, mortifying — something I wanted to be a part of. The idea of growing a tiny person in one’s own body from a mass of cells that divide and divide, then sprout a neural tube, limbs, and organs always seemed fascinating to me. And it is, truly. I’ve loved tracking my little one’s progress as she grows, especially now that I can feel her whirling and thumping inside me.

I knew, theoretically, that pregnancy might be difficult for me based on my mental health history and my mom’s experiences, but my expectations of what that could look like were a blank — I could only hope that whatever was to come my way would be manageable.

Then the nausea hit and never left. Then came the burning nipple vasospasms that were impossible to anticipate, that forced the muscles in my back to clench so tightly I wanted to crawl out of my skin. Then the sciatica developed. Then the carpal tunnel pain in both wrists, which eventually moved solely to the right wrist, but worsened and worsened to the point where it became difficult to do even the most basic of tasks using that hand. The incessant need for sleep. And the depression.

Everyone has a struggle, and every struggle is worthy of empathy.

It’s always been clear to me that pregnancy isn’t all sunshine and roses, but it’s amazing the changes one goes through, physically and emotionally, in order to grow a human. And I never realized how much of it folks suffer silently to avoid judgment. I’m an open book of a person, often sharing my life with my community on social media — and my experiences with pregnancy are no exception — which, of course, leaves me open to criticism.

I recently talked about the nausea: about how it persists deep into this pregnancy; about how violently it wracks my body, the tears and snot that run down my face, how I heave until there’s absolutely nothing left in me, and the tiny capillaries that burst all over my face, leaving red splotches for days; and about the medication that keeps it at bay.

Someone said to me, “Be grateful you can be sick; others aren’t so lucky.”

That stung. More than almost anyone, I know that this pregnancy is a privilege and a gift, no matter how unpleasant. We worked hard to conceive this kid. I was ready to accept that it was over, too — that my body just wasn’t built to carry a baby. The folks in my community know that, which made the comment sting that much harder; it implied that I was ungrateful and that I should smile in response to every sucker punch thrown my way, even if it meant a mouth full of shattered teeth in the end — all because there are other people in existence who have it worse.

It completely invalidated and minimized my experience. The starving-children-in-Ethiopia argument is insensitive and tone deaf. Everyone has a struggle, and every struggle is worthy of empathy. Complaining, expressing frustration, and giving language to pain all have their place, and none necessarily indicates that a person is ungrateful or taking anything for granted. Truly, I worked my body, my mind, my relationship, and our pocketbook hard for this baby; I’m grateful for pretty much everything she’s got to throw my way, no matter how much it hurts me.

I’ve also talked about my fears: of postpartum depression, of the act of giving birth, of her size and what my body can handle, of parenting two children when one can be so difficult. These are some of the biggest, scariest questions I’ve ever been faced with. When, “Just be positive!” or “You’ll be great,” are the responses lobbed back at me, it feels like there’s no room for reality or emotional complexity.

Talking about the realities of pregnancy, of how hard it is, how unpleasant, how disgusting (so much pooping! so much farting!), are frowned upon.

I often find “positivity” to be rooted more in laziness and a lack of empathy — toxic, even. I prefer my optimism delivered with reality in mind, and some empathy too, and I don’t think that’s too much to ask.

To be plain, the expectations we have of pregnant women are f*cked. We’re supposed to be beautiful, glowing bastions of positivity and wonder, marveling at the miracle of life. Talking about the realities of pregnancy, of how hard it is, how unpleasant, how disgusting (so much pooping! so much farting!), is frowned upon.

I got my golden egg, and if anything in my life is miraculous, it is absolutely this pregnancy.

But miracles, like anything else, are complex — and they’re rarely only golden.