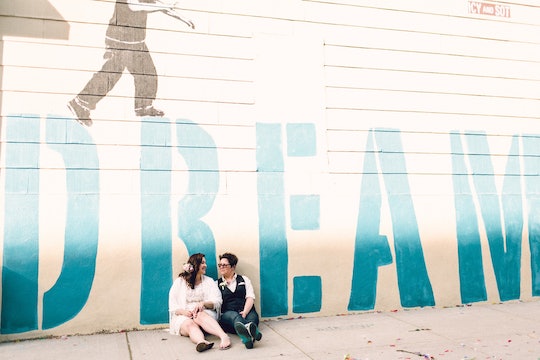 Trying For A Baby In A Homophobic Country

Dese’Rae has been undergoing fertility treatments since 2017. In January, she welcomed a son, carried by her wife. This is the fourth installment of her Trying diary. You can read the previous entry here.

June is a notoriously difficult month for me. Both of my suicide attempts happened in the month of June (in different years), and I’ve had crises in Junes ever since. June also holds good memories: the first time I knew I loved Fel, the first time I told her so, our wedding anniversary. I’m struggling again — not with suicidal thoughts, but a low grade depression that’s got me stuck to the couch. My sleep is wonky, I’m watching sad movies, I let the baby cry and linger before picking him up, I lose my patience more easily (and then beat myself up over it).

The thing about fertility treatments is that they’re a constant affirmation of life: I want my life, and I want to create the life of a little person. It requires so much effort and intention. I have to get past — or endure, really — my fear of needles, and my absolute inability to take pills without gagging. There are the hour drives back and forth to the fertility clinic several times a week to monitor my ovaries (and transvaginal ultrasounds given by a tech who isn't gentle are a special kind of hell, especially when your left ovary is hard to find, like mine is). The hormones, the bloat, the discomfort. It’s constant effort, constant hope, constant worry. This is what makes the struggle beautiful for me: I have to actively choose to stay — and to be better — every day.

Ellen had come out and it was a disaster. Gays weren’t allowed to adopt. I never thought I’d be able to get married back then.

To be trying to conceive our second child as a queer couple is a revelation in itself, and yet the process is shot through with other complications, other emotions. For Fel to conceive Gus, we used an anonymous sperm donor who legally gave up his rights when he made his “deposit” into a sterile cup (though the donor agreed to one contact initiated by Gus after he turns 18), so my son only legally has one parent until I complete the adoption proceedings.

When I was a teenager in Miami in the '90s, realizing I was gay and being forced out of the closet (suburban Miami is surprisingly conservative, and was an incredibly hostile environment for this particular epiphany), I never could have imagined building a family like the one I have. Ellen had come out and it was a disaster. Matthew Shepard was murdered. Marriage equality didn't exist. Gays weren’t allowed to adopt. I couldn't see getting married or having children as part of my future.

I've never been much for Pride, but now that I have a kid, it's different. He needs to know his history. It was heartening to celebrate Pride this year; we spent it with other queer families who look like us, putting our rainbow-clad babies down a backyard slide. Times are better. This is good.

But the invasive questions people ask and the things they say — calling the donor “the father,” or our "baby daddy," or making assumptions about our parental roles based on surface characteristics like the length of our hair — show that many people don't realize what we're up against, or how hostile the world can still be. It also hurts that we can't both be genetically linked to our children, so it’s not always easy to talk about. It's all such personal information. I’m willing to share and educate, but people should know they’re not entitled to that information, and they shouldn’t be so nonchalant with their language in the presence of two women navigating a system that wasn’t designed to be friendly to them to begin with, and in a world where queer parenting is still new and revolutionary.

Do I want to have another kid? I don’t even know if I can. I spent so many months trying to answer that question without even knowing if it was possible.

I've been paralyzed about whether I should do yet another IVF cycle since the miscarriage, but I think I’ve decided to do it. I was sitting at dinner with a friend, telling her and her wife about the baby, about how hard this whole process has been, what Gus's birth was like, and I just thought, "Let’s do this."

I realized I'd been focusing on the wrong thing: desire. Do I want to have another kid? I don’t even know if I can. I spent so many months trying to answer that question without even knowing if it was possible. I don't have the luxury of knowing whether I can achieve a healthy pregnancy. May as well just try again and see what happens.

A couple of weeks after Pride, Justice Kennedy announced his retirement, inspiring a fit of panic like the one I felt in the early days after the election. It didn’t help that we'd just finally made the decision to try for another kid. If Roe v. Wade gets overturned, the dominoes will start falling quickly and LGBTQ+ folks are gonna be the next target. What will it mean for my family? What will that mean for a potential baby or — worse — what if Roe v. Wade gets overturned, something terrible happens, I need to abort, and I can't? What will it mean for us if everything goes well and Fel prepares to adopt this second child?

We’ve started to have real conversations about what our limits are, and what it would take to make us leave the U.S. I know a lot of people say we should all stay and fight, but most of the people saying that aren’t queer and don’t have giant targets on their backs. I spent so many years with a desire not to live that, now that I want desperately to live, I’m not willing to give that up. If it means having to go, then we'll go.

We unexpectedly got the letter with the date for the adoption hearing in the mail this month. The emotions that came along with it were simultaneous waves of happiness and rage. Why is this system so homophobic? Why must every step forward feel tinged by an impossible, hateful past?

So we move forward, toward adoption of the child we have, toward another round of IVF. June will come again, but we'll be prepared then: we'll have adoption papers, a passport for the baby, wills drawn up, power of attorney inked, and, hope willing, another baby.