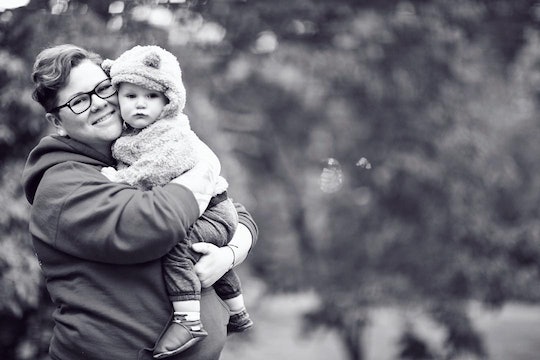 When You're Pregnant, The Depression Isn't Yours Alone

Dese’Rae has been undergoing fertility treatments since 2017. In January 2018, she welcomed a son, carried by her wife. This is the ninth installment of her Trying diary. You can read the previous entry here.

I’ve always known, as a person with a personal and family history of depression, that I would be at higher risk of postpartum mood and anxiety disorders should I ever make the decision to carry a child. So, naturally, when we started talking seriously about pursuing fertility treatment, I began to worry about postpartum depression (PPD) after giving birth.

I dragged my wife, Fel, with me down 143 different hypothetical pathways that included me living with PPD. What if I couldn’t take care of the baby? What if I didn’t bond with the baby? What if I hurt the baby? Or myself? Or both of us? What if it ended up being totally manageable, and I was just getting caught up in emotional tangles for no reason at all?

I thought about my perceived threshold for handling it and, as backups, the coping skills I’ve developed over more than half a lifetime of living with depression, anxiety, and suicidal thoughts; the (admittedly robust) support system I have in place; and my ability to call on it (less robust) in a time of need.

Not until it blindsided me.

It was a slow build. One thing after another, until I could check every box on a list of symptoms that, summed up, amounted to depression.

I was bone-tired, thoroughly exhausted, no matter how much sleep I got. I couldn’t engage with Gus for stretches, and haven’t been able to pick him up for more than a couple minutes at a time because I managed to develop a painful case of carpal tunnel syndrome (carpal tunnel develops as a symptom of pregnancy in up to 62 percent of gestational carriers). It damaged my relationship with him at such a crucial time in his development, and even though he would only turn away from me to reach out to Fel, it stung. Every single time. My back hurt because of sciatica. I’d sneeze or cough and the stretching muscles in my belly ached. I felt weak and useless, and pain heaped more exhaustion on the existing exhaustion.

I felt like a terrible parent, a terrible wife, a terrible friend, a selfish and self-righteous person. I’d fall into tears on the couch in the middle of the day. Sometimes I’d pick at the idea of regret. Did I regret having kids? Maybe I wasn’t made for this, wasn’t meant to carry a child, or to be a mother at all, and coming to know that so late in the game meant that I could only traumatize my kids and lose Fel in the process. And Fel is the only thing in this world I can’t live without, other than Gus.

My pain is no longer just mine to own, and that feels like invalidation, or a kind of erasure.

I hadn’t felt connected to the baby inside me, either. I hadn’t seen her since we graduated from the clinic, and it was still too early for me to feel her. My pregnancy experience and the months of trying leading up to it weren’t exactly positive, so all those little things that maybe make people feel connected just weren’t there for me. Humor is how I cope, and so I’d joke about how she was a little jerk, making me so sick and so weak — but what if those jokes helped color my thoughts? What if the lack of connection exacerbated the depression?

The suicidal thoughts did eventually come to me, too. As if suicidal thoughts aren’t scary enough on their own, having a kid and also being pregnant while they’re happening ups the terror levels 100 percent. Now there are little people who truly depend on me. My pain is no longer just mine to own, and that feels like invalidation, or a kind of erasure — like once I became a parent, my emotional pain could no longer demand to be felt because of this “higher calling.”

And if I didn’t deal with it perfectly, in some socially acceptable way, it would immediately make me a failure. But, as suicidal thoughts are wont to do, they told me that losing me couldn’t possibly be more damaging to my children than having me there as they grew, because I could only hurt them. That losing me would be better for them.

Intellectually, I know that’s not true. I know what suicide grief looks like, and I know what it does to people, especially kids, but… this is the reality of what it’s like living in a suicidal mind.

I’ve spent the better part of three weeks this way, and I’ve barely told anyone. I’m known by my community for being so open about my struggles, but this was too hard to be truly open about. I’ve felt a deep, searing shame — about feeling these things at all, and then about stuffing them into some quiet place in my chest. It’s just another one of those things no one talks about, and I’ve felt complicit in my silence, but I need some relief before I can start waving my flag.