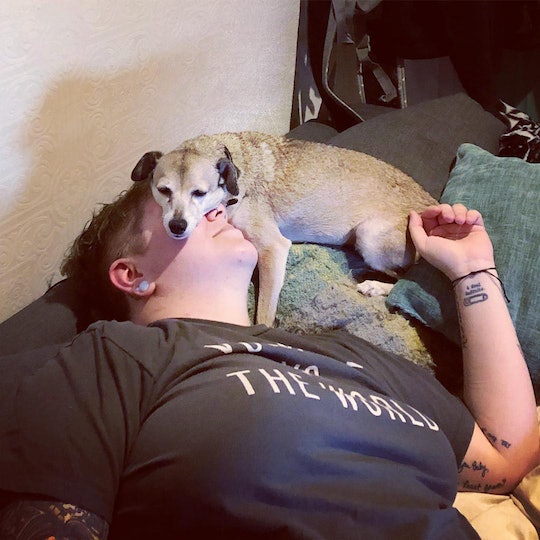 Pregnancy Sucks, No Matter How Badly I Wanted It

Dese’Rae has been undergoing fertility treatments since 2017. In January, she welcomed a baby son, carried by her wife. This is the eighth installment of her Trying diary. You can read the previous entry here.

Not that I expected it to be a walk in the park. I had the sense that it would be difficult for me. I remember my mom’s last experience with pregnancy (I was 15). She was sick constantly. I figured I would also be sick, and I hate few things in this world more than puking, but I was more afraid I would feel trapped in my body. Anticipation is never the same as reality, and that knowledge is what I allowed to drive my efforts toward conceiving. I told myself it couldn’t be all that bad. Often, you anticipate a thing, and it’s much less terrible than expected; unfortunately for me, the reality turned out to be much worse than what I’d imagined.

I have two modes these days: complaining about pregnancy or crying about it. People ask me how I am, and I give them the honest answer: I’m miserable. I feel like a shell of myself. I have nothing else to add.

Everything I do is based around avoiding sickness and exhaustion. My relationship with food is almost nonexistent. I can’t eat most meals my wife makes for me. I can eat soup. And Goldfish. I have to pee all the time, which would be fine if climbing the stairs to get to the bathroom weren’t exhausting. Everything is exhausting. Nausea’s given way to vomiting, and once my stomach starts contracting, it won’t stop until it’s far beyond empty. The heaving is violent, shaking my whole body. At the end, I’m a snotty, sobbing mess. Otherwise, at baseline, I just feel like garbage.

The experience of pregnancy after miscarriage is so fraught. Any feeling of moisture or discharge immediately convinces me I’m having a miscarriage. I’m constantly waiting for the other shoe to drop. The wait for genetic testing results, which will tell us whether or not the baby likely has Down Syndrome or one of the other trisomies, has been particularly hard on us.

I do feel trapped in my body.

Everything else is heightened, too. I’m worrying about being a terrible contributor to household chores, being anxious about not socializing my kid well enough, worrying that I don’t do enough night-time care for the baby while also worrying about needing sleep. I don’t have any time to attend to my career, which I naively thought I’d be able to continue part-time, even as a mom. We can’t afford childcare, and not being able to work is really screwing with my identity. And here I am preparing to have this problem twofold — not to mention all the guilt and fear and regret that comes along with even having that thought. I do feel trapped in my body, like I want to claw my way out of my own skin, and then I feel guilty for feeling that way.

I don’t feel like me. I don’t care about things I usually care about. I rarely get dressed. I barely ever look human. I can’t get off the couch. I can’t tell if I’m hitting a low-grade depression, or this is just what happens to women.

Per the DSM-5, the symptoms of depression are as follows. A person has to experience five or more of them during a two-week period for the diagnosis to stick.

3. Weight loss or weight gain, or increased or decreased appetite

6. Feelings of worthlessness or excessive/inappropriate guilt

7. Reduced ability to think or concentrate (or indecisiveness)

Of these symptoms, I’ve been consistently experiencing seven. In order to receive a diagnosis, however, the symptoms can’t be a result of another medical condition, so I guess I’m depressed, but with a “better” excuse this time around.

But if we’re looking on the brighter side or whatever, we finally heard the baby’s heartbeat. The midwife tried at one point, but my bladder was in the way. A few days later, we tried with our fetal Doppler and found it. It was nice to hear it for the first time at home, together.

And finally, the email came in at 10:03 a.m. I’d told Fel that, no matter where she was when it came, she absolutely had to answer her phone. I opened the email at 10:09 a.m., with Fel on the phone from her therapist’s office. The baby is healthy. The baby is a girl.