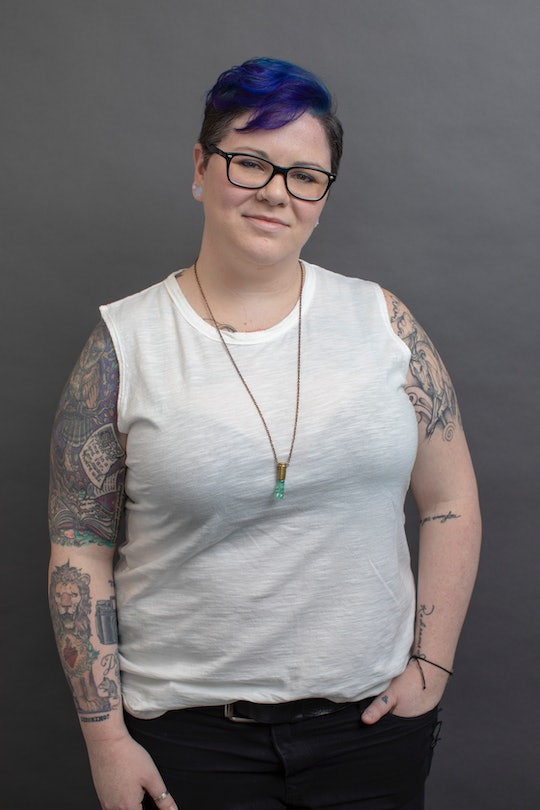 I Gained A Newborn, Lost A Pregnancy, & Almost Lost My Wife... All In 2 Weeks

Dese’Rae has been undergoing fertility treatments since 2017. In January, she welcomed a baby son, carried by her wife. This is the first installment of her Trying diary. To read her second, go here.

For a brief moment, we were both pregnant at the same time. My last IVF cycle was in December 2017. That baby would have been my Christmas miracle, just as our son Gus was my birthday present. I fantasized about how I’d tell this embryo-turned-baby the story about how hard we fought to bring them and their sibling into the world. But that's not how it played out.

I'm Des. I'm 35, living in Philadelphia with my wife, Fel, Gus, and too many pets. We started trying to conceive in January 2017. We knew we both wanted the experience of carrying a child, so we enlisted the help of a reproductive endocrinologist and each had a full workup.

As a queer family, we thought all we'd have to do was procure sperm, have a doctor do a quick insemination, and voilà! Baby! Not the case. Fel was told that her fertility levels were basically pre-menopausal and that she had less than a 5 percent chance of conceiving. The doctor delivered this devastating information very matter of factly, and then suggested that Fel use my eggs because my hormone levels were fairly normal for my age — this would mean completely bypassing the possibility of having a child genetically related to her.

We were devastated. The thought that there might never be a mini-Fel with giant blue eyes gutted me. We spent over a week grieving the loss of that possibility. But something told us that this wasn't the clinic for us (probably their absolute incompetency with queer couples, despite their shiny advertising about how wonderful they are with LGBTQ+ families), so we sought out a second opinion.

At the second clinic, we found our guy. Dr. Glassner said he'd at least be willing to try with Fel's eggs, but that it could take a while. He also pointed out that we didn't have much time, as we were both nearing 35 — the time of the geriatric uterus. It made the most sense for both of us to start trying at the same time.

Fel did her first and only IVF cycle in May 2017. She had her eggs retrieved the day before my birthday. Over the course of the week, we got growth updates, and at the end, we were left with a single, perfect embryo to transfer back into her uterus. She got pregnant.

I did my first IUI cycle in May, my second in June, third in July, and fourth in August. The closest I got to pregnant was a chemical pregnancy/early miscarriage during my second cycle. I switched to IVF.

I was prepared for the bad news, but when they told me I was pregnant, I was shocked and, suddenly, sobbing tears of happiness.

I did my first cycle in September, where I transferred one mediocre-quality fresh embryo back into my body and froze one slightly better quality embryo for another cycle. Failed. In October, my estrogen was too low, so the cycle was canceled. In November, we transferred the frozen embryo. Failed. Which brings us to December.

In late December, like Fel before me, I produced a single, perfect embryo.

I tested and tested, from the fourth day post-embryo transfer until the blood test. Every test was negative. I was crushed. At that point, I'd spent two months trying to figure out what my limits were (emotionally and physically), worrying that I'd spend the rest of my reproductive life in this hormone-jacked limbo, trying and trying and trying.

I went in for the blood work knowing in my bones it was just a formality to confirm that I wasn't pregnant. I talked to the nurse for a long time about what I could do to improve my egg quality for future cycles.

When I got the call with the results, I was prepared for the bad news. When they told me I was pregnant, I was shocked and, suddenly, sobbing tears of happiness. I couldn’t have tested positive a day sooner which, in the end, is a bad sign. Late implanting embryos usually don’t make it. But my human chorionic gonadotropin (HCG) levels were just where they should have been. In a normal pregnancy, HCG levels are the only real indication of a pregnancy's health in the days before it can be detected via ultrasound, and they're supposed to double every two to three days.

We scheduled another blood test (called a repeat beta) to go down two days later to make sure my levels were doubling appropriately. In those two days, we filled our heads with hope and the stories we'd tell this kid when they were older. We started working out what we'd name them. We fantasized about what they would look like. But the next blood test revealed that my levels were not rising as they should, and the doctor was "not confident in the pregnancy."

Fast forward three days to the next repeat beta, and the levels did rise, but again, not as they should. Dr. Glassner sat us down and told us it would be a miscarriage or an ectopic pregnancy, and that I needed to be monitored twice a week. Next beta, my levels rose appropriately, but they were still days behind what they should have been. Dr. Glassner told me again that the pregnancy wasn't viable, but I had options: I could have a D&C, or we could wait and see. I chose to wait. I'd been through too much not to give that embryo its best shot, even if the prognosis was bad.

We were at the fertility clinic when it happened. Fel went to the bathroom on our way out. A minute later, she opened the door and said, “I think my water just broke. I stopped peeing, but then I… kept peeing. Except I’m pretty sure it wasn’t pee. It didn't smell like pee.”

Everything seemed perfectly normal in the beginning, but Gus’ birth was an unexpectedly harrowing experience. Our birth plan was minimal: It was literally just "healthy mom, healthy baby" — no candles, no essential oils, no special music. That was, somehow, still a high expectation. We'd read about the maternal mortality rates in the U.S., but we were still naive enough to believe that everything would be OK. We didn't think we'd walk out of that hospital traumatized, or feeling genuinely lucky that Fel was still alive at all. But we did.

And then I lost my pregnancy on Jan. 27, 11 days after Gus was born. At eight weeks, I miscarried what was, developmentally, a 5-week-old embryo.

We don't often talk about the trauma birth partners experience — especially in same-sex marriages, where the possibility exists that both partners may carry a child — but it's real.

Over the course of two weeks, I gained a newborn, lost a pregnancy, and almost lost my wife. Sitting with the idea that I may have lost Fel, or that the baby may have lost her, makes me question how important it is to have a child genetically linked to me, and whether the baby really does need a sibling like we originally intended. We don't often talk about the trauma birth partners experience — especially in relationships where the possibility exists that both partners may carry a child — but it's real. It's with me. And I can't shake it. Do I want to put my family at risk of losing me, too, if something goes wrong a second time?

I’d never been in a healthy relationship before Fel. In fact, I was one of the first gay people to marry in New York and subsequently one of the first to divorce. My ex wanted to try for babies right away, but I wasn’t ready. Knowing what I know now, even if we’d stayed together and started down that path, it would have broken us.

With Fel, it was always right, from the very beginning — even when she had to walk me through my divorce. Neither of us ever expected to fall in love — we both felt too damaged for that, and we both had fresh breakups on our minds — but we did, and I knew so quickly that she was the one. One of her first questions to me was whether I wanted children; to say no would have been a deal breaker. She had a history of heartbreak around that question.

We got married in June 2015, after dating for three years. We've spent our time since then building up to this moment: moving to Philadelphia, settling into our careers, buying a home, readying our minds and hearts for little humans.

We'd made a plan: If my cycle didn’t go well in December, I would take a few months off once the baby was born to learn How to Mom and to supplement to build egg quality.

What we know right now is that my ovarian reserve — literally, the quantity of eggs left in my ovaries — and the quality of those eggs are both generally lacking. You can't change ovarian reserve, as women are born with a finite number of eggs, but research indicates that there's a positive correlation between supplements and egg quality. It usually takes about three months for the supplements to work their magic.

We were expecting to try again in April or May, but I'm too stuck in my head and I'm resisting the supplements. I'm just not ready. I started going to therapy weekly instead of bi-weekly to try and work it out, but I can't find the answers. I don't know if I want to keep trying.

I wish I had the luxury of time to make the decision, but given that my body isn’t performing the way it should for my age, I don’t feel comfortable waiting. Every month that passes in which I ovulate without trying makes me worry that I’ve lost my golden egg — and that feeling is amplified because of how conflicted I am right now. I’m terrified, and no answer feels like the right answer.